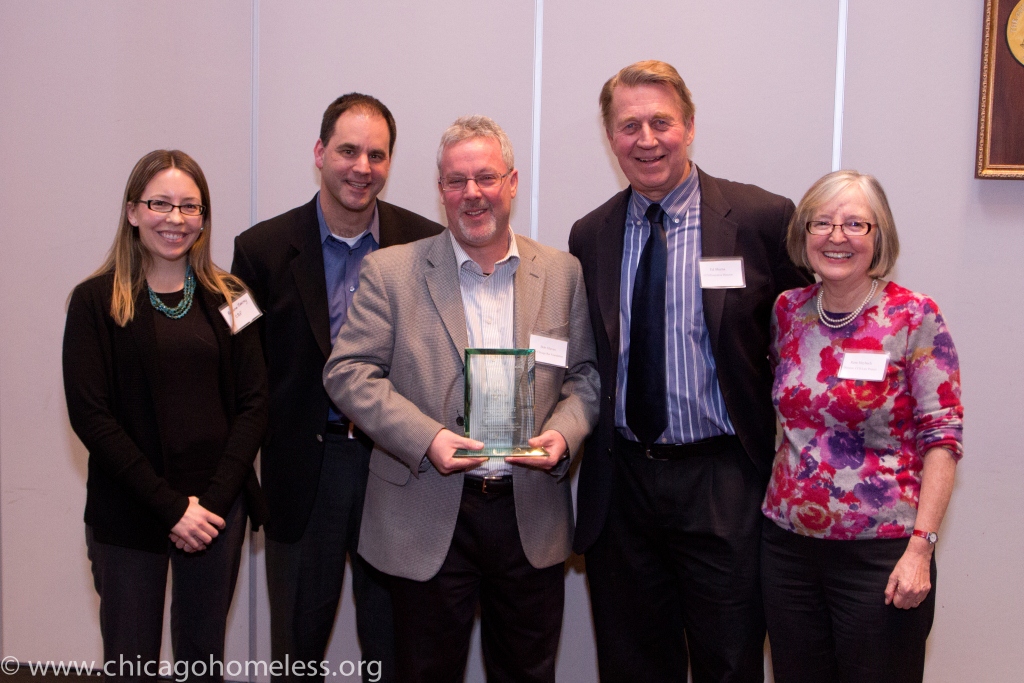 CCH and its Justice Circle welcomed 50 supporters and honorees to a Jan. 17 reception featuring the work of the Law Project’s Youth Futures mobile legal aid clinic for homeless and unaccompanied youth.

A highlight of the evening was hearing the story of a young client who, with her sister, had to fight to stay in the suburban school where she competes in gymnastics and Spoken Word.

Briana Perkins, 16, said CCH helped her and her older sister, a senior, remain at Oak Park River Forest High School. The sisters are homeless, living doubled-up with an aunt and their cousins in Oak Park. Because the apartment gets crowded, Briana said she and her sister sometimes stay with other family for a few days.

“Eventually, the school sent an investigator to follow us home and did not believe we really lived in Oak Park,” said Briana, a junior.

The west suburban high school moved last fall to expel the sisters for non-residency, despite state and federal laws that allow homeless students to remain in their original school or enroll in the school nearest where they now live.

After the girls’ mother contacted the CCH Law Project, “they took our case and they fought for us to stay in school. It took awhile, and it wasn’t easy, but eventually we won (the hearing).

“We’re still going from home to home… but I don’t need to worry about staying in my school. I love the Law Project. I don’t know where I’d be without them – probably in Chicago, or not in school at all,” Briana said.

CCH gathers each January to meet with donors to The Justice Circle, a giving campaign for legal professionals to make tax-deductible donations to support the work of three attorneys and the law fellow who staff the CCH Law Project. Ninety percent of CCH’s 298 legal clients were homeless students and unaccompanied youth in FY12. To date this year, the Justice Circle received $13,730 in donations from 50 individuals and two firms/corporations (donors are listed on the CCH website).

Law Project Director Laurene Heybach also presented honors to the directors of two foundations whose ongoing support is pivotal to Youth Futures. The Chicago Bar Foundation (CBF) was commended for generous support of CCH and almost 40 legal aid programs across the city, including grant support, professional training, and networking with other funders. The CBF also helped secure the support of Youth Futures’ largest funder, the Alvin H. Baum Family Fund.

“Everyone in the legal community makes our work possible,” said CBF Executive Director Bob Glaves, explaining that the bar foundation administers grants that are generously funded by Chicago’s legal community.

Joel Friedman, an attorney and the director of the Alvin H. Baum Family Fund, also noted that CCH legal aid attorneys “have some of the hardest jobs I’ve seen.”

The Youth Futures clinic served 139 youth clients from Chicago and the suburbs in FY12, half of them (70) unaccompanied  – throwaway teens, former state wards, and young adults (to age 24) who are homeless and without support of family or guardian. Eighty clients (57.5%) had cases focused on school-related issues. Last school year, Chicago Public Schools counted 3,005 unaccompanied youth among its 17,255 homeless students.

Jim LoBianco, a CCH Board member and the executive director of StreetWise, opened the evening at the Chicago Bar Association’s Philip H. Corboy Hall by citing the various ways that CCH is an effective advocate for homeless people. He noted how important it is to work on behalf of children and teens who are often impacted for a lifetime by growing up in abject poverty.

He also told of a recent visit to an Englewood school where a 6-year-old told his principal, happily, “The shelter I’m in is a good shelter because it has flowers!” Mr. LoBianco said the Law Project helps ensure that homeless children, whether they are in a “good shelter” or not, at least have the security of returning to the same school every day.