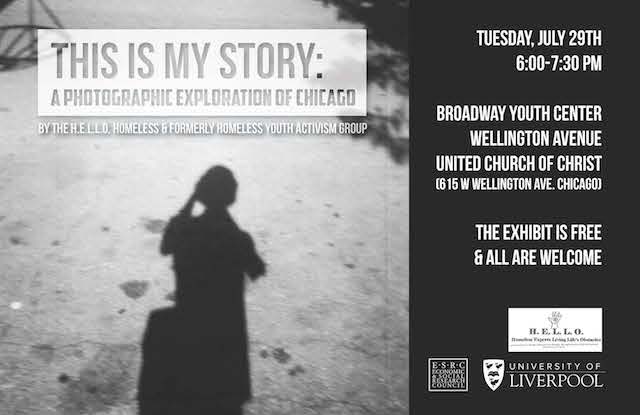 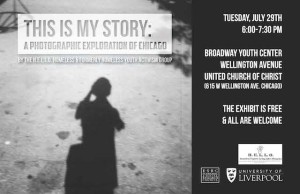 C.J. quietly lays two dozen photos on the table before him. Two are pictures of the park where the 24-year-old used to sleep. Several photos are graphic images of single words: Live, Give, Rest.

But one photo jars Adrianna King, who is sitting next to him. For a moment Adrianna slips back into the past as she stares at the photo, which features light flowing down a gritty city alley that is lined with garbage cans and surrounded by tall building walls. At first no one can hear Adrianna, but she speaks louder.

“ I recognize that place,” she said. “If we had heavy bags, we should stash them there. In that alley.”

“It’s not a good memory,” C.J. said. “Some of my stuff got stolen from there. The people living around there, if they saw us putting our stuff there, they would call the police and the garbage men, and our stuff would get thrown out.”

C.J.’s photos are being readied for display in the exhibit, This Is My Story: A Photographic Exploration of Chicago. The free exhibit will be held 6 p.m. to 7:30 p.m. at the Broadway Youth Center, located at Wellington Avenue UCC Church, 615 W. Wellington, Chicago. The youth exhibit examines “place” and what it means to be included or excluded from a place.

It’s the latest project by HELLO, an advocacy group for homeless and formerly homeless youth that meets Tuesday evenings at the youth center. Staffed by CCH’s Youth Attorney Beth Cunningham and Policy Specialist Jennifer Cushman, HELLO also receives support from the Broadway Youth Center, The Night Ministry, and ONE Northside. Now in its tenth year, HELLO is one of the longest running youth groups of its kind in the U.S.

HELLO gave disposable cameras to 10 of its participants who have coped with homelessness and life on the street. They were invited to photograph places in Chicago that are meaningful to them, either a positive or a negative memory. As the project nears completion, five youth have stayed involved and will display their work.

“The project uses a method known as ‘photovoice,’ that is, using participatory photography to stimulate dialog about community issues,” said Natalie Robinson, a volunteer spearheading the project. “In this case, the dialog relates to perceptions of Chicago, specifically relating to homeless youth experiences and inclusion and exclusion from public urban space. This is particularly relevant in the context of the Homeless Bill of Rights, passed in Illinois last year, which sets out that ‘homeless individuals cannot be denied access to public spaces solely because of their housing status.’”

A Ph.D. candidate from the U.K.’s University of Liverpool, Natalie began with HELLO in March. She volunteered for a similar project in Vancouver, and hopes that her work with Chicago youth will contribute to social research on homeless experiences.

“So much of the research on homelessness focuses on statistics,” she added. “But this is qualitative and seeks to bring to light the experiences and the perspectives of those experiencing homelessness.”

One photographer, LeRoy Kirk, has participated in HELLO meetings for eight years. Now graduating from the group at age 25, LeRoy said his photos reflect what’s around his and other neighborhoods.

“I wanted to compare the balance of rich and poor in the west surburbs as well as in my neighborhood of Roscoe Village,” he said.

LeRoy’s photos show the thrift store that he frequents, and the red brick exterior and balconies that overlook lush courtyard gardens of the building where he now lives.

“I love the courtyard and the architecture of my building,” he said. “It makes me feel comfortable. It’s just like they say, ‘There’s no place like home.’”

Another favorite photo is a close up of the ubiquitous signs telling motorists how to pay for parking on Chicago streets. He titled that photo, Parking Dictator.

“It’s a sign that is telling you what to do,” LeRoy said.

Photographer Hope Faith Love, 21, said using a camera made her feel powerful. She took pictures of areas and buildings in Chicago where she has felt excluded.

“It felt good to exploit those places,” she said. “I wanted to show the filth that exists.”

Other images Hope captured showed the optimism and natural beauty that coexist with the city’s grime and grit. She took a picture of the park in front of an elementary school, showing the bench where she rested while she was homeless. One of her favorite photos features bright yellow flowers bursting from a sidewalk planter in Lakeview.

“I was feeling happy that day,” she said. “I felt life, I felt prosperity, I felt solidarity. I felt that more hope and love was coming.”