Now settled in at Lake Forest College, freshman Jennifer Salgado-Benz worked hard to make sure she got to go to college at all.

With a 4.3 GPA, Jennifer ranked 4th in her class at Phoenix Military Academy. A softball player, Jennifer also got up at 4:30 a.m. all four years for drill team practice. Since 10th grade, she has worked at a North Shore country club on the weekends and summers, earning money for school and to help her mom with bills.

Knowing she had to find her own way to college, Jennifer competed for scholarships, winning several, including a renewable $2,000 award from the Chicago Coalition for the Homeless.

Jennifer explains that her mother, Maria, always worked hard, sometimes juggling three jobs at a time. Maria had lived on her own since she was 13 years old. But when the factory laid off or day labor ran out of jobs, her mom had nothing left to care for her children.

“One time we were living in a motel somewhere on California. At another point, we lived under a bridge near Cicero & 37th. I was 2 or 3. My mom would have to walk around all day with all four kids. We could only stay at her friend’s home when the friend’s husband was away at night.”

When they lived at a Humboldt Park shelter, Jennifer was enrolled in Head Start: “I loved learning. I loved reading books. I think that is why I always loved school.”

When Jennifer was 5 years old, her mother found new jobs and an apartment. A few years later, her mom lost work and the family ended up in a Wicker Park shelter. They lived for three years in a church basement with 20 other families, their cots pushed together in the corner for some semblance of privacy.

Helped by a housing choice voucher, Jennifer’s family had rented a small house on Chicago’s northwest side, “in a beautiful neighborhood.” She enrolled at Sayre Language Academy.

“I guess because of all the moving around, I wasn’t as good a student as the other children. In 5th grade, I would get stuck on some of the easy math, even subtraction. So I stayed after school, got help from my teacher. By 7th grade, I was on the honor roll.”

Jennifer thought she would do best at a small high school. She found her niche at the South Side’s Phoenix, with help from 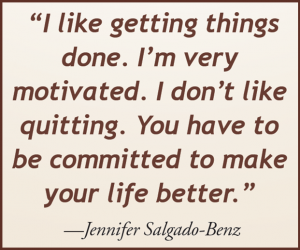 “Every night I’d go home exhausted, I’d wake up happy the next morning to see Mrs. Mares,” she said.

Recently, Jennifer’s family faced difficulty again when their landlord stopped paying the gas bill and the mortgage. Last year, Jennifer and her mom had to move in with her sister’s family. To help out, she continues to work weekends at the country club to send money home.

But studies remain the focus for the prospective psychology major, along with learning her way around college.

“I like getting things done. I’m very motivated. I don’t like quitting. You have to be committed to make your life better,” Jennifer said, with a confident smile.

Chicago Coalition for the Homeless helps students in need

Since the CPS court order, our Law Project collaborates with the homeless program staff in city schools. CPS served a record 17,255 homeless students in 2011-12, a year’s increase of 10.7%.

CCH’s three legal aid attorneys represented 210 homeless students last school year. Of this, 89% of children and teens lived in Chicago, and the rest in 25 subur­ban districts.

A youth attorney runs a mobile legal aid clinic for homeless teens. Half of Beth Cunningham’s 139 clients were unaccom­panied youth – homeless and on their own, without family or guardian. CPS counted 3,005 unaccompanied youth in city schools last year.

To showcase the abilities of homeless students, CCH awards renewable scholar­ships funded by private donors. Since 2004, CCH has awarded more than $120,000 to 33 CPS seniors.