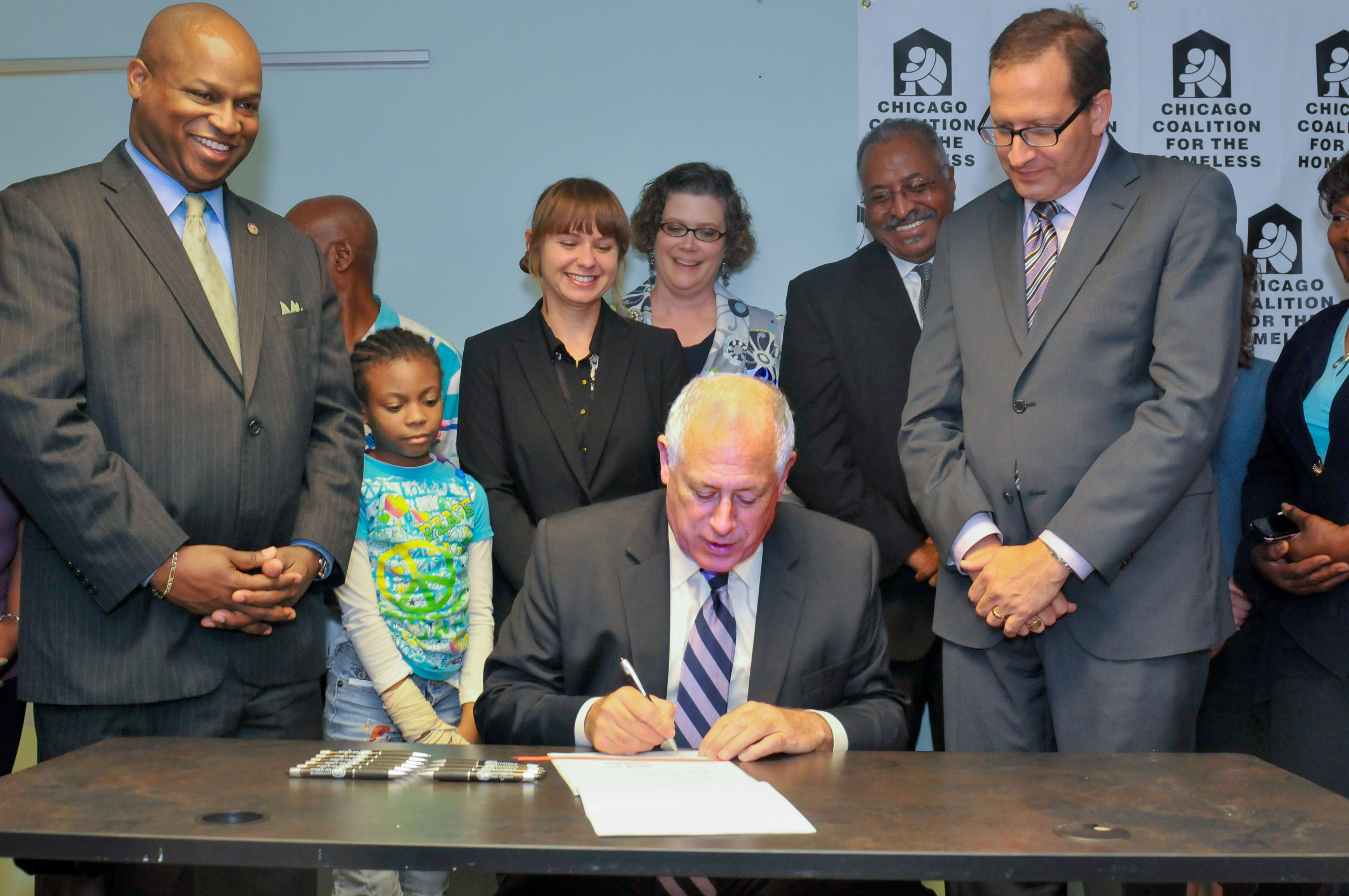 Gov. Pat Quinn signed the Illinois Bill of Rights for the Homeless (Senate Bill 1210) on Thursday, making ours the second state in the country to enact a bill barring discrimination against people without housing.

CCH Policy Specialist Jennifer Cushman worked with both legislative sponsors to secure support for the bill, which passed the Illinois General Assembly in one session. Sponsoring legislators both praised her advocacy, with Rep. Welch noting that Ms. Cushman was at his office to talk with him about the bill within a half hour of signing on as a sponsor.

Effective immediately, the Illinois Homeless Bill of Rights protects homeless people from discrimination by creating a list of basic rights. These include the right to keep one’s job, to access emergency medical care, to access public spaces and transit systems, the right to privacy of personal property, records, and information, and the right to vote on the same basis as other people.

Under this act, these listed rights cannot be denied on the basis of one’s housing status. If one of these rights were violated because someone were homeless, that individual would have the right to take legal action and seek damages.

Gov. Quinn praised the new law for protecting “fundamental rights,” noting his support for other measures that would help low-income workers, including a higher earned income tax credit and raising the state’s minimum wage to $10/hour over the next several year.

Sen. Silverstein said he drafted the bill because “people should have certain rights, to get back on their feet.”

The Illinois anti-discrimination measure first passed the State Senate on April 25. The Illinois House voted for the bill 76-33 on May 10, and the Senate voted 48-7 on May 28 to ratify a House amendment that corrected a technical error in the original bill.

During the spring session, Laurene Heybach, director of the CCH Law Project, testified for the measure before the Illinois Senate and House judiciary committees.

Among those attending Thursday’s bill-signing ceremony were Michelle Saddler, secretary of the Illinois Department of Human Services and a former board president at CCH; Rocco Claps, director of the Illinois Department of Human Rights; and Brady Harden, a CCH board member and regional housing coordinator on the governor’s staff. CCH staff and leaders also attended, as well as board members Bernie Dyme, Rich Goldstein, Mary Fran Riley and Jessica Staiger.

Interestingly, officials from the Rhode Island Coalition for the Homeless (RICH) told CCH that their inspiration for the nation’s first homeless bill of rights came from legislation introduced nine years ago in Illinois.

The late State Rep. Wyvetter Younge (D-East St. Louis) sponsored House Bill 4116 in 2004, which passed the House but did not progress to a Senate vote, according to research by Ms. Cushman. HB 4116 offered several provisions enacted in this year’s Illinois bill, including the right to emergency medical care, the right to vote, and privacy of personal records.

Puerto Rico also passed a homeless bill of rights in 2007.