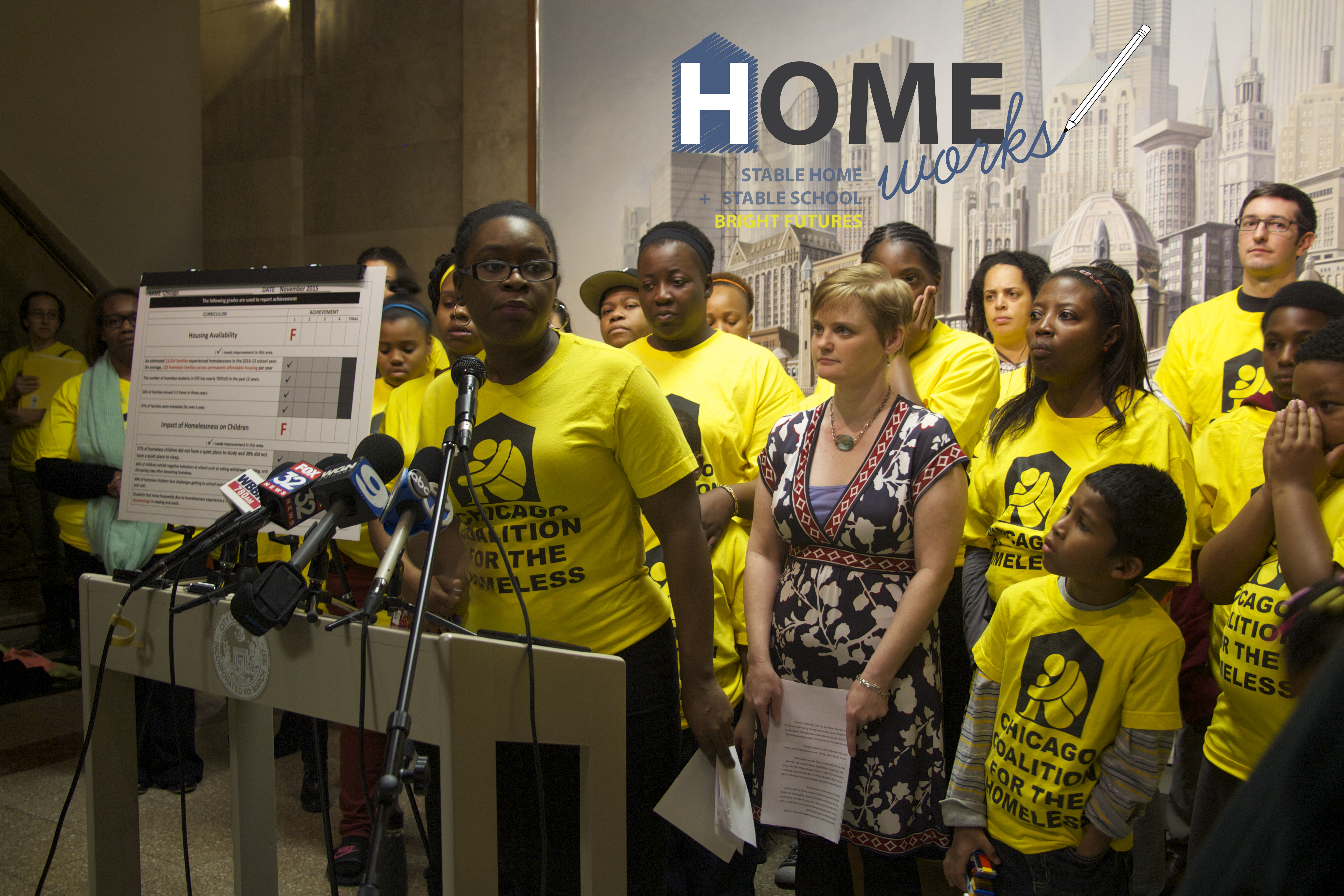 During public schools’ Report Card Pick-Up Day, the Chicago Coalition for the Homeless released a report card of its own – assessing how the city of Chicago fails to meets the needs of its homeless students and families.

The report card was released as CCH launches HomeWorks, a multi-year campaign to create affordable housing for homeless families and improve school services for homeless students.

Working with parent leaders and housing providers, HomeWorks will advocate for improved school services and more family-sized housing, including 500 housing units for families through the Chicago Low-Income Housing Trust Fund.

At a City Hall press conference on Nov. 18, homeless parent Latoya Ellis spoke about the impact on her three children, ages 8, 14 and 16, of moving into a family shelter in August, after her work hours were cutback.

“Homelessness has immensely affected my children’s education,” Latoya said. “My 8-year-old last year was doing so well in school that they wanted to skip up a grade level. Now his reading comprehension and his math are not up to level. Homelessness is a major distraction.

“My kids are going through a lot. When they should be focused on class, they are worrying about ‘when are we getting our own place?'”

An estimated 13,054 Chicago families experienced homelessness during the 2014-15 school year. Yet less than 1% – 123 families – can access permanent affordable housing on average each year.

The city’s failing grades follow a recent survey by CCH of 118 homeless families with school-aged children. Results show that the experiences of homeless Chicago students mirror the national research: Housing instability harms children’s learning, upends their emotional development, and disrupts the lives of their families.

“We are failing the most vulnerable children and families in our city,” said Associate Policy Director Eithne McMenamin. “As they struggle to stabilize their lives, the severe shortage of affordable housing and lack of support services cripples families as they attempt to move out of homelessness and provide stability for their families.”

Eight housing providers are partnering with CCH on the HomeWorks campaign, including Primo Center for Women and Children. Primo CEO Christine Achre spoke of the trauma children face in becoming homeless. She noted that 46% of homeless children will exhibit trauma symptoms that warrant clinical attention, yet only one in five of those children will actually access needed services.

“The city of Chicago must commit to ending family homelessness, just it has pledged to end homelessness among veterans,” said Policy Director Julie Dworkin.