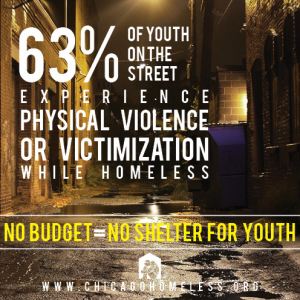 In a protest organized by the Chicago Coalition for the Homeless, about 130 homeless youths, service providers, and advocates rallied outside the Thompson Center Wednesday morning.

We called on Gov. Bruce Rauner to work with the General Assembly to end the budget stalemate and resume funding vital human services, including shelters for homeless youth across Illinois.

It has been more than 80 days since services for homeless youth received any state funding. CCH helped conduct a new survey that shows 77% of homeless youth providers in Illinois have already reduced or eliminated services, or will be forced to make those cutbacks, if the budget impasse continues.

“Should we not get our state money by around December, we would probably have to close, because our federal funding does not pay all of the rent,” said Flora Koppel, executive director of Unity Parenting and Counseling and chair of CCH’s statewide Youth Committee.

If Illinois fails to resume funding youth programs like Unity, the state would lose federal matching funds, including the $500,000 now paid to Unity. Illinois spent $5.6 million to help homeless youth in FY15, about $2,000 per youth.

As reported by CBS Chicago, Guzzardi said he hates coming to another rally like this, noting people need to get angry.

“It also hurts me to hear us having to justify these services on financial grounds, to say that, ‘Oh well it’s cheaper to provide services for homeless people than to let them die in the streets,'” Guzzardi said.

Please add your voice: Email this Action Alert telling your legislators and the governor to support homeless youth funding.

Several homeless youths talked about life-changing services they received at the Broadway Youth Center and shelters like Unity’s South Side shelter, Ujima.

As reported by the Responsible Budget Coalition, the failure to fund vital services, including childcare, mental health, adult and higher education, economic development, and immigration and refugees, also harms homeless youth. If Springfield fails to pass a budget that chooses revenue, more closures will occur and homeless youth will lose shelter and basic human services.

Studies have long shown that unsheltered youth are much more likely to be raped, sexually exploited, physically assaulted, and to go without needed health care.