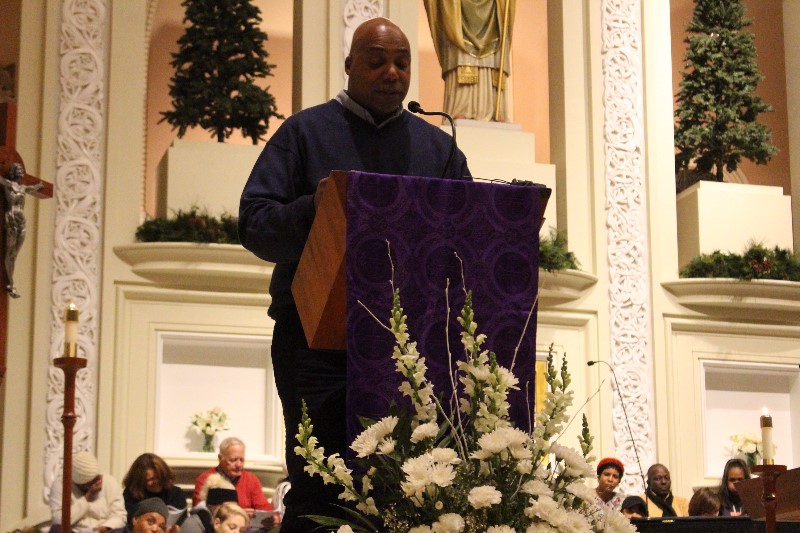 Twenty-six Chicagoans who died in 2016 were remembered at a Homeless Memorial service at Old St. Pat’s Church.

Featuring singers from the Harmony, Hope & Healing choir, the Dec. 19 service celebrated the lives of people not forgotten by those who cared about them in their struggles with homelessness. Among them, “Richard S.” was remembered as “he always helped others more than he received help.”

The annual service was first organized in 2010 by the Chicago Coalition for the Homeless, Ignation Spirituality Project, and Old St. Pat’s Church, 700 W. Adams. It features a pre-service dinner for homeless families and adults, this year serving 50 people from Breakthrough Urban Ministries and Madonna House.

“I was homeless for three years, so I understand what it means to be homeless,” said John Owens, a Breakthrough SRO resident. “It’s almost like they’re brothers of mine.”

Dominique Moore, a mother of two, said her family has coped with homelessness for a year.

“I’ve lost a few people, relatives and friends, who were homeless,” said Ms. Moore. “I’m here in support. We may have lost a few battles, but we’re hoping to end the war and end homelessness.”

“I like coming to these events. It’s very touching,” said Kellia Phillips, a mother of three who volunteered with CCH’s fall voter registration drive.

“We’re supporting the Breakthrough program,” added David Brown, “because they helped us get out of our situation. The staff is amazing.”

Another attendee, Phillip Miller, received help at Matthew House and Olive Branch Mission after he was paroled three years ago. He was invited to the memorial by CCH organizer Keith Freeman.

“I think it’s important to be here, me being homeless. I went to a Fight for $15 rally with Keith. Before that, I didn’t think we had a voice. It seems like some don’t see us. We don’t want to be homeless, but circumstances put us in these positions.”

Speakers included Brooklyn Priestley, an older youth, who was homeless when he moved here from Dallas two winters ago. He slept on trains before finding shelter and services from La Casa Norte and The Night Ministry.

“Today I’m no longer homeless. I have a place and I’m back in school,” he said, to applause.

“Indignities, I imagine you’ve suffered for awhile,” he read, at one point. “Yet perhaps faith fed you the strength to greet each stranger with a warm smile. Surely they would know your name.”

The names of 26 homeless Chicagoans who died this year were read aloud. From Annette M. to William D., some were known only by the month they died. Others were remembered personally, such as “Louie P., beloved husband and father.” And Rhonda M., “a sweet, kind-hearted soul who lived along the Chicago River at Harrison.”

The Chicago service is affiliated with National Homeless Persons’ Memorial Day, one of more than 150 events across the U.S. organized by the National Coalition for the Homeless.