You wouldn’t be the first person to ask Gloria Davis why she works so hard and for so long as a community leader at the Chicago Coalition for the Homeless.

“Advocating for change,” she explains, “helped change my life.” 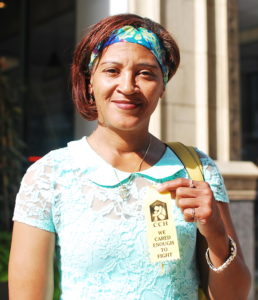 Gloria volunteers with the Reentry Project at CCH. She speaks out on behalf of people with criminal records, people trying to rebuild their lives in the community – the same tough position she was in just five years ago.

She began working with CCH after meeting one of our organizers at Haymarket Center. Gloria was living there temporarily, in recovery from addiction. She wanted to get back to meaningful pursuits in her life, as she had when she was raising her two sons and worked in group homes for people with disabilities.

The organizer, Rachel Ramirez, encouraged Gloria to help her and other reentry advocates change state laws that turn a conviction into a life-time obstacle. That resonated with Gloria.

“I worked in health care. I worked in schools. To be told I can’t do that anymore for a problem I had years ago? I had a background and I turned my life around. I paid my debt to society.”

Working with the Reentry Project, Gloria helps advocate for measures that provide access to fair wages, jobs and housing. Over the years, she’s put in many 18-hour days traveling to and from Springfield to talk to legislators or testify at a hearing. There are meetings at the Chicago Housing Authority. And Gloria is among core leaders giving input when the Reentry Project plans its work, including statewide measures advocated with the Restoring Rights and Opportunities Coalition of Illinois (RROCI).

She has seen many wins – and an early setback. “I worked on (raising) the minimum wage at every level, from legislation to grassroots, going door to door to talk to voters. It’s sad they didn’t enact it,” says Gloria, noting state leaders ignored a 2014 advisory referendum OK’d by 64% of voters.

And the wins? The Reentry Project persuaded the Cook County and Chicago housing authorities to pilot placement of clients recommended by reentry service providers, helping the agencies complete the first 100 placements last year.

And in the last three years, the Reentry Project and its RROCI partners proposed and enacted six bills in Springfield, all passed with bi-partisan support: Four statewide bills ended life-time hiring bans in schools, parks, and health care facilities. Two other measures open up record-sealing opportunities, including a bill signed by the governor this summer.

Gloria’s efforts have impacted the lives of countless people in reentry, starting with her own.

Donors committed to the reentry advocacy done by the Chicago Coalition for the Homeless have offered up to $8,000 in funds to be used as a 1:1 match for contributions in response to this appeal. We are excited to offer this opportunity to our supporters to double the impact of their gift to CCH. Donate today!