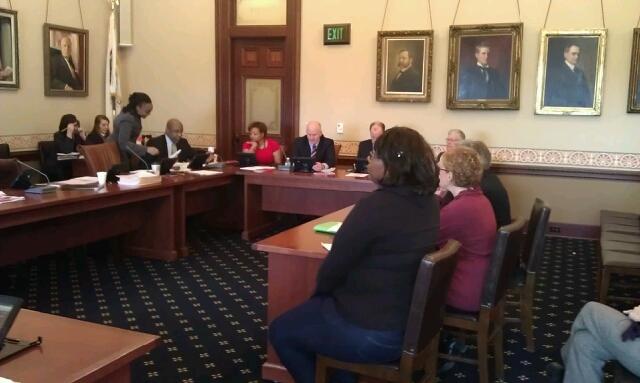 The Illinois Senate voted 56-1 this afternoon to approve Senate Bill 1872, a measure that would discontinue charging prostitution at the felony level. The measure now goes to Gov. Quinn for final approval.

An initiative proposed by End Demand Illinois, legislators have said they were moved by the testimony of a Glenda Sykes, a prostitution survivor active in the CCH leaders group, Survivor Advocacy Group Empowered (SAGE).

Kudos to SAGE leaders, organizer Rachel Ramirez and Policy Specialist Jennifer Cushman for their effective advocacy on this issue.

April 11:  The Illinois Senate voted 53-1 today to pass a bill that would discontinue charging prostitution at the felony level, with several senators citing moving testimony given by a CCH community leader, Glenda Sykes.

Senate Bill 1872 has moved to the Illinois House for consideration, where it was transferred to the House Rules Committee.

A prostitution survivor, Glenda Sykes, testified March 13 before a Senate committee considering SB 1872, a measure proposed by End Demand Illinois. Glenda testified that having a felony record makes it very difficult to build a new life and support herself. Glenda has applied for work as a nursing home aide.

“In my 16 years in the Senate, she was one of the most compelling witnesses I’ve ever heard,” said Sen. Dale Righter (R-Mattoon), who noted that he’s “an advocate for personal responsibility” and that eliminating felony prostitution is the “right thing to do.”

Illinois has one of the most punitive standards for prostitution in the U.S., with a prostituted person eligible to be charged at the felony level after one prior conviction. Illinois is among only eight states that charge prostitution at a felony level.

Glenda is one of the first women to successfully complete two years’ probation through Cook County’s WINGS prostitution court, which CCH helped to develop through its Prostitution Alternatives Round Table. Glenda is also a founding member of a CCH leadership group for survivors of prostitution and trafficking, Survivor Advocacy Group Empowered (SAGE). Community Organizer Rachel Ramirez mobilizes SAGE. A grant from the Sisters of Charity BVM helps to support the work done by PART and SAGE.

A group of seven SAGE leaders and several CCH staff will go to Springfield April 16 to talk to House members about SB 1872.

Chicago Alliance Against Sexual Exploitation (CAASE) manages End Demand Illinois, leading the effort to end the state’s felony-level prostitution charge. A fact sheet about SB 1872 is available from the campaign. Other organizations working on the campaign include Project IRENE and Protestants for the Common Good.