Many thanks for your generous support on Giving Tuesday, a global day of charitable giving held Nov. 29. We sought to raise $8,000, and by day’s end, 89 donors generously gave $8,755, surpassing our goal by 9%. We are so grateful!

We’re also thankful for our youngest donor, Peninah. Accompanied by her mother, Anika, the 5-year-old donated $215.58 to the Chicago Coalition for the Homeless (CCH), most of it earned running a hot cider stand Sunday in her South Side neighborhood.

Peninah was profiled Tuesday by Leah Hope on  ABC 7 Chicago, a sweet story about the “Young Girl with a Big Heart.”

“The $8,000 goal covers the cost of bringing 200 people to Springfield to advocate on behalf of homeless families, youth and adults,” said Executive Director Doug Schenkelberg.

CCH also encouraged donors to consider consider monthly gifts. We are grateful to the seven donors who decided to begin donations on a monthly basis. Our 89 Giving Tuesday donors included 37 (41%) who gave a first-time gift to CCH. 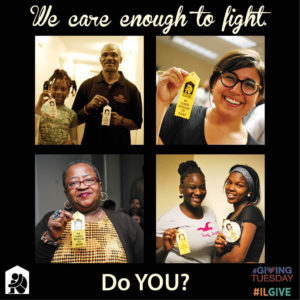 CCH is the only non-profit in Illinois solely focused on advocacy for and with people experiencing homelessness. All donations to the non-profit are tax-deductible.

We appreciate the financial and volunteer support given by the Chicago area community. Rated a 4-star charity by Charity Navigator, CCH was again named a “Great Nonprofit” for 2016, based on online endorsements submitted by volunteers and donors.

CCH promoted the day via social media, using the hashtags #GivingTuesday and #ILGive. Helped by some of our supporters, we posted updates throughout the day on Facebook and Twitter, and via social media by Forefront, a statewide association of 850 non-profits and 190 grant makers.