At a forum for 250 people, four West Side aldermen committed Tuesday to withhold public subsidies and tax breaks for a West Side redevelopment project until a Community Benefits Agreement (CBA) is negotiated and signed.

“We know why we’re here,” said Gloria Davis, a CCH leader and co-chair of the forum at First Baptist Congregational, 1613 W. Washington Blvd. “On the West Side, we need good jobs and affordable housing. We want to ensure benefits get to Chicago.”

Community leaders packed the church hall to sing songs of freedom, raise their hands and voice strong support for a CBA between the Westside Community Benefits Coalition, which mobilized the forum, and the Illinois Medical District (IMD) Gateway Development Partners. CCH had 138 of its community leaders in attendance. 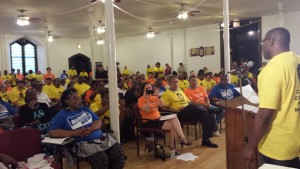 The coalition is calling for a CBA before any public subsidy, such as tax-increment financing (TIF), is awarded to IMD Gateway’s planned $300 million redevelopment at 2020 W. Ogden Avenue. In May, the Illinois Medical District Commission approved Gateway’s plans for a 9.5-acre development that includes a hotel, retail businesses, restaurants, and more than 200 housing units.

The IMD Gateway project is projected to create more than 1,000 permanent new jobs in a 28th Ward neighborhood with the some of the highest rates of unemployment in the U.S. But the developer has rejected the coalition’s request to enact a CBA.

Led by groups including the Community Renewal Society and CCH, the coalition has proposed a legally enforceable contract that requires specific community benefits, including a minimum number of full-time jobs being filled by West Side residents. Some of these jobs would be targeted to those who have been unemployed six months or more, as well as ex-offenders.

During the forum, a St. Leonard’s Ministries administrator, David Rosa, spoke of the desperate need for jobs for ex-offenders trying to reenter the community. He spoke of clients who land job offers farther away, such as the western suburbs, but cannot accept because they lack transportation for the commute.

“We need a CBA to make sure that we benefit from economic development,” Mr. Rosa said.

To show aldermen the broad support for a CBA that benefits the West Side, residents are invited to contact their aldermen. They can be reached here.

A video from the rally can be seen here.