This week marks the end of my 10 years working for Chicago Coalition for the Homeless as I move on to work for Interfaith Youth Core. 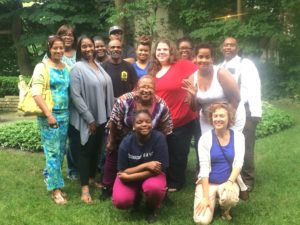 I feel so grateful for the amazing people I have had the opportunity to work with during my time at CCH. The leaders and staff have had a great impact on me. Together we have been able to create change. We have learned together, grown together, and educated the community and people in power together.

My first project was to create the Speakers Bureau, working with 15 grassroots leaders who share their stories of homelessness and how they learned to advocate for policy solutions. I started by doing one-on-ones with more than 100 people to learn about homelessness and gather ideas for how to create the Speakers Bureau. A decade later, we have educated and connected with some 30,000 people. The power of the Speakers Bureau never ceases to inspire me. The leaders open up to the community and the audience is left enlightened and ready to fight for change with CCH. 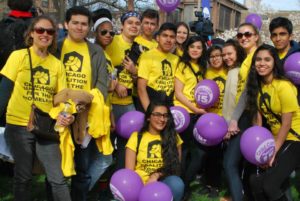 My next project was to offer a way for Speakers Bureau audiences to advocate with us on issues such as jobs and funding for shelters, affordable housing, and youth services. The enthusiasm of the high school and college students I worked with has been energizing. It has been wonderful to teach people how to be civically engaged. Having the support of the greater community has increased our ability to win on important issues.

While facilitating speaking events in the Chicago Public Schools (CPS), students began to open up about their own experiences with homelessness. I realized that by organizing in schools we could reach more youth and families who experience homelessness while living doubled-up in the homes of others: 88% of homeless CPS students are doubled-up, but previous to organizing in schools, we only organized in family shelters. 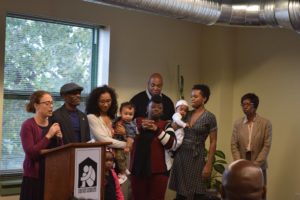 Four years ago, we formed an Education Committee of parents, grandparents, students, and educators. After addressing some local school issues, we launched a citywide campaign to secure a new policy guiding CPS treatment of homeless students. This was done in partnership with the CCH Law Project. After fighting for a year and a half we won a new policy, enacted in April 2016, that protects homeless students’ right to enroll and fully participate in school. The leaders fought hard and tirelessly, sharing their stories and expertise, including testifying at eight CPS Board meetings. They supported and mentored each other, providing us with the strength to win.

Most recently, I have been working with students experiencing homelessness at their high schools. I also organized parents of elementary school children, ensuring that doubled-up homeless families could secure assistance through a new CPS-based housing program, Families in Transition (FIT). They shared their stories, giving testimony to the fact that being doubled-up is “just as homeless” as living in a shelter or on the street. This helped CCH and the HomeWorks campaign advocate that doubled-up families be eligible for FIT, which offers permanent housing to the 100 most vulnerable homeless families from six CPS elementary schools.

Throughout my time Chicago Coalition for the Homeless, I have been able to bring together people from various faiths to advocate to prevent and end homelessness. I have seen how faith has called people to fight to protect others. In my new position as Alumni Relations Manager at Interfaith Youth Core, I will support young adults who are interfaith leaders bring together people from various religions in collaboration.

I will miss the wonderful CCH leaders with whom I have built relationships.  I will bring the countless lessons they have taught me about collaboration, faith, and leadership development into my new role.