After 20 years of working on behalf of families, youth and adults who are coping with homelessness, our Executive Director Ed Shurna has announced plans to retire November 30.

Over 12 years, Ed’s caring leadership furthered the reach and impact of work done by the Chicago Coalition for the Homeless. Under his leadership, CCH has led and partnered on effective campaigns, built new relationships in every sector, and strengthened the finances of an organization we are proud to say has never accepted funding from the government groups with which it advocates.

CCH is conducting a search for its next executive director, guided by a search committee of eight veteran Board members, with assistance from Noetic Search, LLC. The Board of Directors is committed to finding the right person who can help to continue the excellent work of the organization.

-Bernie Dyme, President, Board of Directors 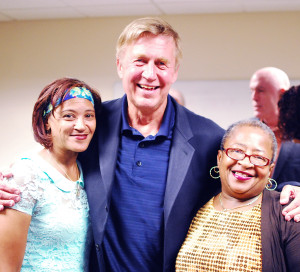 Below Ed describes memorable achievements – in advocacy and organizing – through the years.

After almost 20 years at the Chicago Coalition for the Homeless, I have decided to retire this fall. My decision to leave has not been easy. I love CCH, our mission, the people we work with, our staff, our supporters and everyone that contributes in whatever way possible. The years were filled with funny, sad, loving, exciting and always meaningful memories.

To name a few, when I first came to the CCH, we were working on a South Loop campaign to demand replacement SROs (single-room occupancy units) for the hotels and rental housing being destroyed. That campaign ended up winning three new SRO buildings, housing more than 1,000 people in the South Loop.

And there is the infamous 1996 story of “Tree Man,” a homeless man who dressed like a tree, carrying a sign saying: “If I dress like a tree, will you care about me?” Mayor Daley was building numerous medians across downtown with beautiful trees and flowers. We wanted the mayor to fund affordable housing, not just street planters. Tree Man followed the mayor at all of his public appearances to bring attention to the need for housing for people experiencing homelessness.

I spent eight years working on public housing issues through the Campaign to Protect Public Housing. We predicted the destruction of public housing would lead to increased homelessness in Chicago. Despite large protests and demonstrations with thousands of people, the city demolished all CHA high-rises and most of the low-rises. The result: More homeless people living on the streets, parks, viaducts, and Lower Wacker Drive.

We ran a 10-year housing campaign called “It Takes a Home to Raise a Child,” expanding CCH advocacy to Springfield. We won major victories: the start of homeless prevention grants for families, a rent-support program, and first-time funding for housing in an Illinois state capital budget. To date, these programs helped more than 110,000 Illinois households avoid homelessness and access affordable housing.

I can’t list everything we accomplished in 20 years, but I certainly must mention our Fair Trade coffee project (Coalition Café) and creation of a creative writing outreach project called Horizons. We run a Speakers Bureau that reaches almost 4,500 people a year, won two court settlements to protect people who sleep on Lower Wacker, and proposed Put Illinois to Work, a state jobs program that employed 28,000 people after the recession hit. Also, our Sweet Home Chicago housing coalition, the CCH Associate Board, Hopefest concerts with stars like Bo Diddley, our legal aid to homeless students and youth, and our Statewide Network organizing in nine suburbs and downstate cities. Years ago, we joined other progressive groups to launch the Grassroots Collaborative. Together we passed a Chicago living wage ordinance, as well as a big-box store ordinance – the only ordinance Mayor Daley ever vetoed. The list of accomplishments goes on and on.

I cannot possibly name everyone who made a difference. But I especially remember those who have passed on and whose memory still brings a smiling tear to my face: John “Juancho” Donahue, Les Brown, Wardell Yadaghan, Rene Maxwell, Stephanie Hooker, Bo Harris, Ron “Treeman” Lonas, and Beauty Taylor.

I have been blessed with so many wonderful people and experiences at CCH. One person stands out: my wife Michelle. Had it not been for CCH, I would never have met this wonderful, loving, caring, intelligent, successful woman. For this I am most grateful.

In my years with CCH I have met the most amazing people of all races, ethnicities and backgrounds, whether homeless or housed, male, female, LGBT or straight, rich, poor, young, old, with a criminal record or not, believers and non-believers. Our organization is home to everyone. We do not judge people by what they have or don’t have. Everyone is important. Everyone is special. Everyone makes a difference.

None of our accomplishments are the work of a single individual. Nothing was accomplished except as a team. The CCH staff is as talented and committed a human rights staff as exists anywhere in Chicago and possibly across the country. We have a first-class Board of Directors made up of committed men and women. We have a community leadership team composed of formerly homeless youth and adults. We have an Associate Board that continues to amaze me with boundless energy and enthusiasm.

You can see why my decision to leave is bittersweet. It’s a decision 47 years in the making. I began my career in community organizing in 1968, with the Organization for a Better Austin on the West Side. Organizing has enabled me to travel the world, live in other countries, train organizers across the country and globe. It is special that I end this portion of my professional life with the Chicago Coalition for the Homeless.

I came to CCH because of two very special individuals: Juancho Donahue and Mabel Manning. Many people knew Juancho, CCH’s long-time executive director, a bigger-than-life hero, close friend, colleague and inspiration. Mabel was a mystic, mentor, inspiration, friend, and warrior who I met working on the near West Side. She taught me the meaning of struggle. I have tried to live my life following the lead of these two freedom fighters.

Soon I will move on to the next stage of my life: more time with grandkids in Colorado and Missouri, exploring the mysteries of the cosmos and evolution of life, contemplation, reflection and action for justice. Life is a creative adventure. It is calling me to stay on the mystery ride and trust in the future. I am so thankful for all of the CCH family of friends and supporters. We truly have made this world a better place.