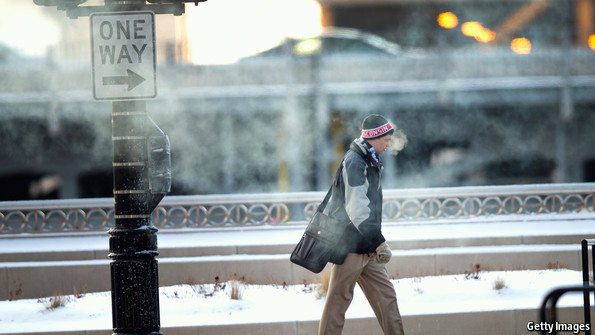 WHEN your correspondent moved to Chicago at the end of October, her friends gave her a thermal blanket, her godmother two pairs of gloves (one for cold and one for even colder weather) and her mother sent her to The North Face, a retailer, to get the warmest winter boots they make. “Is it very cold?” they asked every time they called the newly arrived Chicagoan. “Do you have the right kit?” For all of December I laughed about their well-meaning concern. “Piece of cake, it’s like London, only sunnier and windier.” I wasn’t sure what the fuss was all about.

This changed with the onset of the first real snow—and the first real cold of the winter this week. Temperatures started to plunge in the evening of January 4th—and have gone down ever since. On January 6th residents of the greater Chicago area woke up to between two and five inches of snow, a pretty sight, best enjoyed in a warm room with a cup of cocoa in hand. By then the temperature had gone down to minus 12 degrees Celsius (10 Fahrenheit), which felt much colder thanks to the ever present wind. Today temperatures are forecast to go down to minus 18 degrees Celsius (0 Fahrenheit)—and are said to feel like minus 34 Celsius or minus 30 Fahrenheit thanks to the wind chill.

After the experience of last year’s polar vortex, a period of extreme cold in January, when passenger trains were stranded, commuter trains stopped, schools closed and social services struggled to provide emergency shelter for the homeless, Rahm Emanuel, Chicago’s mayor, was keen to appear prepared. Surrounded by the bosses of various city agencies, he reassured his city on January 5th that “Chicago can weather this storm. It will be true for this week and will be true for the rest of the winter”.

All of the city’s 280 snow ploughs and salt spreaders are in operation, making main streets passable, according to the Department of Streets and Sanitation. The ploughs can even be tracked in real time at www.chicagoshovels.org. The Department of Family & Support Services (DFSS) said that it is operating warming stations throughout the city, including community centres and libraries. The capacity of nine homeless shelters can be expanded if needed, the agency said, and reminded everyone that landlords are required by law to heat apartments to 68 Fahrenheit during the day and 66 at night. The Fire Department warned people to be careful with space heaters that can catch fire easily.

The most vulnerable in these extreme temperatures are Chicago’s homeless. Estimates of their numbers range from more than 138,000 (the Chicago Coalition for the Homeless) to 6,294 (the official figure for 2014 from a report by the DFSS). The DFSS conducted a point-in-time count of homeless people in the night of January 22nd last year—whoever was either in a shelter or sleeping rough that night. The Chicago Coalition for the Homeless (CCH) on the other hand considers people homeless even if they temporarily stay with a relative or a friend, but do not have a permanent address. “Homelessness is still getting worse, even though the recession is over,” says Julie Dworkin of the CCH. Last year saw an increase of homeless children by 18.6%. Family homelessness is on the rise, partly because in recent years social services have targeted single-adult homelessness.

“At the moment we are not overwhelmed with this emergency situation,” says Monsignor Michael Boland, head of Catholic Charities of the archdiocese of Chicago. Five Catholic charity vans crisscross the city at all hours to drive people to warming centres or shelters. The charities provide 275 beds in the city and the suburbs as well as emergency food boxes and a nightly supper for those in need in various locations throughout Chicago. “Now we are all in crisis mode and coping,” says the monsignor, but longer-term solutions are needed. Mental illness is an especially serious problem among the homeless. Less help is available this year after cuts in funding from the federal government and the state of Illinois.

Yet Mr Emanuel is right: Chicago can weather this storm. Chicagoans are a hardy lot, used to shoveling, which is the responsibility of every homeowner and tenant and done mostly with good humour. The infrastructure coped relatively well so far, apart from numerous flight delays and cancellations at Chicago’s O’Hare airport, a derailed freight train and some delays of commuter and passenger trains. Chicago’s public schools are closed today and those who can will crack open their laptops and work from home.

Chicago’s homeless are being looked after, too. “Nobody will be turned away from a shelter at the moment,” says Ms Dworkin. But it would be so much better if there were far fewer who need emergency shelter. Homelessness in Chicago is not worse than in other cities, but Chicago has not made it a priority and spends less than other big cities on fighting it. Last autumn Mr Emanuel vowed to end homelessness for veterans. It would be great if the same pledge could be made for homeless families.