LAKEVIEW — Tenants at the troubled Chateau Hotel have been served with eviction notices, according to residents, and several are contesting the eviction to buy time to find alternative affordable housing.

Most of the people still living in the single-resident occupancy hotel — an unclear number that’s estimated to be between 35 and 75 by different sources — were served last week. At least seven of them are working to contest the evictions in court with help from the Uptown People’s Law Center.

All residents with eviction summons received notices in February that terminated 30-day leases, meaning they were legally expected to leave by the beginning of March. But some people were not able to find alternative housing so stayed after the month was up to avoid the streets, residents and advocates said.

Chateau Hotel, one of the last independent affordable housing facilities in Lakeview, has long been the subject of complaints of drug dealing, fighting and panhandling.

Ald. James Cappleman (46th) had vowed to clean it up and pressured the owner to make changes or leave, leading to a strained relationship with housing activists who allege the alderman has not done enough to help low-income residents.

Affordable housing on the North Side has incited protests in past weeks. In Rogers Park on Thursday, residents of distressed property Astor House rallied about their own eviction, which protestors said was “bogus” and mimicked the way residents at Chateau left.

Elizabeth Hartline, a Chateau resident who received an eviction summons, has struggled to find housing due to a previous eviction. Some of her neighbors have had issues because of disabilities or income level qualifications, she said.

“We’re all going to get evicted eventually,” she said. “We’re all looking for places, including me. But unfortunately, without SRO’s [single-resident occupancy], my options are limited at this point.” 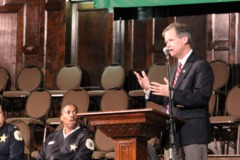 The ideal goal of pushing for trial is to find a way to stay at the Chateau, but going to court is mostly intended to buy time for residents to find alternative housing, said lawyer Nicole Schult of the law center.

Since an eviction will further hurt residents’ chances of finding housing, they were recommended to leave before the summons if possible, Schult said.

Until the court action is settled, which could take two to three months, the tenants are squatting at the Chateau in the eyes of the landlord, she said, though they will argue that residents have the right to stay on the property.

“We’re trying to help them to find the resources to be able to move,” she said.

The alderman has said that all residents who met with Department of Family and Support Services or Catholic charities would be placed in housing. Some residents have said the meetings have only resulted in referrals to shelters — a complex situation because some transitional housing requires time spent in shelters.

A week after the most recent protest in front of Cappleman’s office and house by activists, the alderman visited Lakeview Pantry on Wednesday to meet with client case manager Jenny Dwyer, who has been working with Chateau residents.

He wanted to check up on residents and hear how many still need help, said Sreya Sarkar, director of education and advocacy for the non-profit.

But Lakeview Pantry did not have many answers. The number of people DFSS and charities — and, in turn, the alderman — has actually placed in alternative housing is still unclear, Sarkar said. Cappleman told the pantry he planned to meet with both DFSS and the charities again soon, she said.

“We have seen the alderman is trying in his own way, but I don’t have the final report of who has gotten help.” she said.