UPTOWN — A Salvation Army food truck returned to its usual spot near the lakefront Monday, the mobile outreach unit’s first visit to Uptown since this past weekend’s controversy over whether it should continue to serve the neighborhood’s needy.

The food truck, which the organization has sent to  Uptown since 2009, was the subject of a dispute between Ald. James Cappleman (46th) and Salvation Army officials, who said Cappleman asked that the charity stop feeding people free food at the corner of West Wilson and North Clarendon avenues.

Cappleman released a statement Sunday acknowledging he was at a contentious meeting with the group, but said his goal was to work with the organization in helping the homeless.

“No one should ever have to be worried about where his or her next meal will be,” he said in the statement.

John Welles, 68, who lives in low-income housing in Uptown, was one of more than two dozen people who sought food from the truck Monday. Welles, who said he has no living family and has been unemployed for 15 years, said a few free meals a week makes a big difference since his Social Security check is not always enough for him to both pay for rent and food.

Salvation Army Captain Nancy Powers said that in the unit’s first year, 2009, it helped get as many as 600 people off of the street, and that it does the same for about 300 individuals every year. The food is just the organization’s “calling card,” to establish relationships with people they hope to help find long term solutions to circumstances in their lives, including drug abuse, mental illness and homelessness.

“The point is to establish a relationship. Today I take a bowl of soup to you, tomorrow [you] might go to detox,” Powers said.

The Salvation Army’s Director of Homeless Services, Christine Henry, said case workers “come out and bring to the streets the things that the homeless won’t come out to get.” Henry said it is an effective strategy, but that the organization serves a “different crowd” than it has in recent years.

“It’s not so much the homeless getting food from my truck as it is the residents,” she said.

About half of the largely middle-aged and elderly men who came for a meal Monday lingered and mingled with caseworkers after eating food. Others ate on the spot and walked away or immediately left with the food.

Cappleman, a former social worker and teacher, has said he is working on behalf of people like those eating out in the cold Monday— but his response to the Salvation Army controversy and promise of more advocacy won’t stop a Wednesday evening protest planned outside his office.

“This food truck issue is the latest in a string of actions,” said Rogers Park lawyer and activist Thomas Westgard, who plans to be at “The Feed the Hungry,” protest March 6 at 5 p.m. along with others who echoed similar sentiments about Cappleman following his statement.

Westgard cited recent news of rent increases at the renovated Chateau Hotel that could price current residents out, Cappleman’s efforts to close the Wilson Men’s Hotel and his relationship with developers in Uptown who Westgard said want to limit the amount of affordable housing options.

“The most needy among us are being attacked just to help real estate developers make a little more money,” he said.

Organizers said the protest started as scattered discussions among residents and activists Saturday night — but Uptown resident Stavroula Stacie decided to centralize those efforts by creating a Facebook page to help organize a united effort.

“As an Uptown resident who walks past Cappleman’s office every day on my way to the Red Line, I feel compelled to let this man know how appalled I am,” she posted on Facebook.

Asked about the status of the protest following Cappleman’s response Sunday night, she said, “We’re still going ahead with it.”

More than 200 people had indicated they were going as of Monday morning. 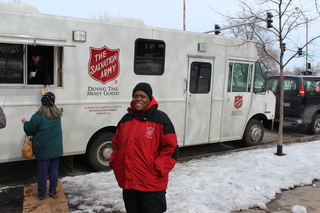