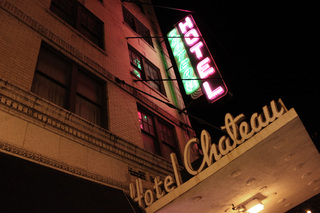 DOWNTOWN — The new owner of a troubled hotel that provides one of the last options for independent housing in Lakeview has funding to gut and rehab the building, his lawyer said in housing court Tuesday.

Attorney Mitchell Asher represented the unknown new owners of Chateau Hotel, 3838 N. Broadway Ave., at housing court at Daley Center Tuesday morning. He responded to multiple poor living citations from the city by saying his client would be vacating and renovating the building.

However, he gave no timeline for the renovations.

Cappleman announced earlier this month that the building had been sold to new, unnamed investors. Asher and Cappleman again refused to reveal the owner’s identity Tuesday.

“I made a promise” to keep it secret, Cappleman said in response to Chateau Hotel residents, who were enraged at the lack of details about the status of their home.

Another court date is set for 11:30 a.m. March 5. The owners of the building are legally obligated to give residents notice if the won’t be allowed to stay there at the single-room occupancy building, but because most residents are on short-term leases, or have no leases, the notices could legally come just a week in advance.

Many Chateau Hotel residents see the building as their only housing option and showed up at court to voice their concerns. After weeks of rumors, a new staff at the building and a sudden end to services such as bed sheet changes, the hearing offered little information regarding when the building might shut down — or if a renovated building would offer apartments that are still affordable.

“I don’t see how I’m not going to be homeless,” said Pedro Donaldson, a resident who said an earlier eviction and low income prevents him from living in alternate housing.

Cappleman stood by Asher at the hearing and told reporters and residents that he cared about living conditions. Correcting violations such as rampant garbage and fire code violations is “out of respect for all of humanity.”

“It is appalling,” he said of the conditions, after a partial tour of the facility. “It is not safe.”

Residents will be interviewed by city social services to assess whether they qualify for other affordable housing options, Cappleman said. Residents that suffer from mental illness or drug or alcohol addiction will be offered services, he said.

One female Lakeview resident showed up for the hearing because a man kicked her dog in the face while she walked by the hotel last year.

“It has an unsavory presence,” said the woman, who did not want to be named.

Jim Ludwig, of Northalsted Business Alliance and Triangle Neighbors, and Chester Kropidlowski, of East Lake View Neighbors — who’ve both long advocated for the safety of the building — said they were optimistic about its future. Ludwig said he wants to “protect long-term residents as much as possible.”