Derrick Lyons is grateful for a life and career that are on track after years of being homeless.

He credits rediscovering his faith and his voice, including his volunteer work as a community leader with the Chicago Coalition for the Homeless.

“I thought it was the end of the road,” Derrick says of life two years ago. “I was so depressed… I took a big look at myself and thought you know what, something has to change.

“I started going to church, and then I joined CCH, where there are people fighting to end homelessness. That kind of encouraged me, until I started working again.”

In April, Derrick landed a position as kitchen facilitator at The Hatchery, a new food and beverage business incubator on Chicago’s West Side. He applied after asking for a referral from the men’s shelter where he lived, Breakthrough Urban Ministries.

With an associate degree from Malcolm X College and certificates in culinary and kitchen sanitation, Derrick finally landed the full-time job opportunity he’d trained for. Now living with a cousin, helping to care for her ailing mother, Derrick hopes to overcome community reentry barriers to secure an apartment of his own.

Derrick first experienced homelessness after his family lost their home to foreclosure over a decade ago. Unable to secure full-time work, he could not afford housing.

“I was going to interviews with a big old suitcase. I would make an excuse, saying I had been on a trip, but it was all my clothes,” he recalls.

Derrick last became homeless after fire destroyed his sister’s house five years ago. Over the years he has lived in parks, under a bridge, in abandoned buildings, rode the El overnight, and stayed in nightly shelters. He sometimes doubled-up with friends or relatives, offering to cook and clean in exchange for a place to sleep.

“People will let you stay with them maybe three months, then they ask you to leave,” he says. 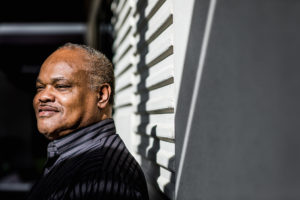 Last year, Derrick was encouraged by another Breakthrough resident to meet CCH Senior Organizer Keith Freeman. Through shelter outreach, Keith offers information to people experiencing homelessness, organizing those who are interested to work with him on the Bring Chicago Home housing campaign.

“We were talking about housing and I heard about how Chicago Coalition for the Homeless marched in the Fight for $15. I went to the first meeting and I was like, ‘You got me.’ I didn’t look back,” says Derrick, now a member of the campaign’s Grassroots Leadership Committee.

Helped by service programs that assist adults facing reentry issues, Derrick recently secured court expungement for an old record. He also earned a scholarship to Chicago State University. Working for a degree in health information administration, Derrick commutes two hours each way to attend classes two nights a week. And at his West Side church, Derrick is excited to have been chosen for a solo in the fall choir concert.

“I feel great about myself now,” he says, smiling.

“At 57, I feel that it’s been a long time coming. I finally landed a break. Life is finally changing.”