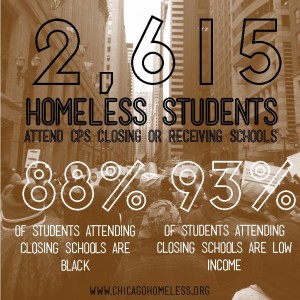 Our Law Project offers legal aid to homeless students – sheltered, doubled-up – who face issues with enrollment, fee waivers and other school issues. They can be reached on a toll-free line, (800) 940-1119.

Homeless children make up 8.3% of the 31,438 students impacted by the Chicago Board of Education’s May 22 vote to close and merge 99 schools this June, per an analysis by the Chicago Coalition for the Homeless.

That is twice the share of homeless students citywide.

CPS has identified 4% of its total enrollment as homeless, with almost 18,000 homeless and doubled-up students identified this school year. There are 2,615 homeless students attending the 99 schools that are being closed or scheduled to receive closing schools.

A six-member school board appointed by Mayor Rahm Emanuel agreed to the largest round of school closings in U.S. history. The plan includes closing 49 elementary schools and one small high school, Mason, and merging them into 49 other grade schools.

The Law Project at CCH monitors enrollments because most of its casework (96% in 2012) focuses on assisting homeless students and youth in Chicago and the suburbs. CCH submitted written testimony opposing the school closings. Homeless enrollment data is culled from a February 2013 enrollment report compiled by CPS.

Under the massive plan, another 28 schools are impacted – five schools will become “turnarounds,” with all teaching and support staff fired and replaced, and 23 grade and high schools will undergo 11 “co-locations” in shared buildings.

When including all 127 schools impacted by closure/mergers, turnaround and co-locations, a total of 41,096 students will be impacted, and  3,607 students (8.8%) are homeless.

They include 379 homeless children attending five turnaround schools. They are 17.5% of the 2,165 students impacted by a turnaround. (Bennett called off a sixth turnaround, at Barton School.)

Four grade schools were spared closure by the Board after being recommended for a last-minute reprieve by schools CEO Barbara Byrd Bennett. A fifth school, Canter Middle School, will be phased out in June 2014 so that its 7th graders can avoid four school moves in four years due to prior closures, according to media reports.

The only high school impacted by closure is Mason. Its North Lawndale campus had 61 students, three of them homeless.

At 5 p.m. on March 21, CPS unveiled the names of 132 schools it was proposing for closure/merger, turnaround or co-location. Chicago Teachers Union has estimated more than 1,000 teachers will be fired.

One of the closures will move Attucks School for the second time in five years. It has 131 homeless children at its 51st & State campus. CPS proposes that over a two-year period Attucks be merged into Beethoven, a school at 25 W. 47th St. that already has 74 homeless pupils. Combined, the schools would be expected to eventually enroll more than 200 homeless pupils, making up almost one-third of total enrollment.

CPS identified 17,255 homeless students last school year (2011-12), another record that reflected homeless children comprise 4% of the 404,000 students enrolled in 2011-12. CPS is on track to identify more than 18,000 homeless pupils citywide by the end of this school year. Homeless students include those from families that are doubled-up and youth who are living on their own without family, with more than 2,300 unaccompanied youth identified as students this year.

“The massive school closures are unprecedented in Chicago and across the country,” said CCH Associate Legal Director Patricia Nix-Hodes. “CPS’s plans amount to experimentation on our children, overwhelmingly low-income students and students of color.

“Since 2004, the Law Project has assisted students experiencing homelessness who were impacted by school closures. CPS has never demonstrated its ability to successfully serve students transitioning to new schools. We have seen students lost in the process as well as students being at risk of increased violence. Even on a much smaller scale, receiving schools have not been adequately prepared. Students have arrived to new schools without enough desks, books or staff. School records have failed to arrive in a timely manner. Adequate transportation has not been provided to get students to the new school.

“It is inconceivable that CPS will be able to provide all impacted with better school choices and meaningful transition and transportation services, especially with the final announcements taking place so late in the school year.