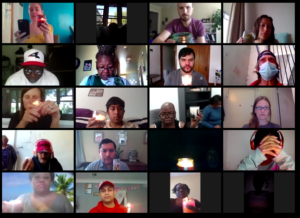 On Wednesday morning, advocates and individuals with lived experience of homelessness held a virtual vigil to call out the increasing pattern of violence against people living on the streets and demand the city interrupt this pattern by making a significant investment in housing. In July, at least two violent attacks were made on individuals experiencing homelessness in Grant Park, one of which resulted in the death of 58-year-old Aaron Curry.

Tom Gordon, a resident of an encampment in Uptown and volunteer leader with Chicago Coalition for the Homeless (CCH) shared his take on the recent violence, “We may be unsheltered and living on the streets, but we are still human beings. The murder of Aaron Curry, the daily pattern of trauma and violence that individuals like me experience – including harassment by the general public or being evicted from the only place we can call home – all of this could be prevented if the city prioritized housing. It’s not right.”

According to the most recent analysis from CCH this past Spring, nearly 77,000 people experienced homelessness in Chicago in 2018. A majority of those are people living doubled-up, meaning they stay temporarily with friends or family. However, it is not uncommon for people living doubled-up to spend nights sleeping on the street, in a car or on the train between stays. Studies show that people living in this manner are particularly susceptible to hate crimes, violence and trauma.

In their latest report, “Vulnerable to Hate: A Survey of Bias-Motivated Violence against People Experiencing Homelessness in 2016-2017,” the National Coalition for the Homeless documented at least 112 anti-homeless attacks that occurred in the United States in 2016 and 2017 and analyzed 1,769 reported acts of violence committed against homeless individuals from 1999-2017. Of the 1,769 violent acts, 476 victims lost their lives as a result.

In addition to the violent stabbings in Grant Park, a series of fires were set at homeless encampments in Avondale on July 13, destroying several people’s personal belongings. Gary Jimenez, a youth leader with nearby Logan Square Neighborhood Association shared, “there are an infinite number of reasons why people may experience homelessness – COVID has made everyone acutely aware of the issue, the vulnerability of the everyday Chicagoan to experience homelessness and the need to address it. The city needs to take responsibility and interrupt the pattern of hate against people experiencing homelessness by investing significant resources in housing. It’s not that complicated. Housing equals safety.”

Although city funding for homelessness has increased to $27.3 million this last fiscal year, advocates say that at least an additional $100 million a year must be set aside for permanent supportive housing (PSH) to make a significant impact on the issue. PSH is a model that combines affordable housing with supportive services and is seen as the best practice to keep people safely housed permanently.

Alderman Carlos Rosa of the 35th Ward agreed with the need to prioritize housing, “We need a systemic shift in how we address homelessness and create safety for the most vulnerable in our city. We should not have a race to the bottom where people experiencing homelessness must compete to receive housing. We need to prioritize, shift and create resources to ensure that everyone is safely housed. This was true before COVID-19 and is even more apparent now during a pandemic when housing instability is worse than ever.”

If you would like to support Aaron Curry’s family by donating to assist with cremation expenses, please do so here.