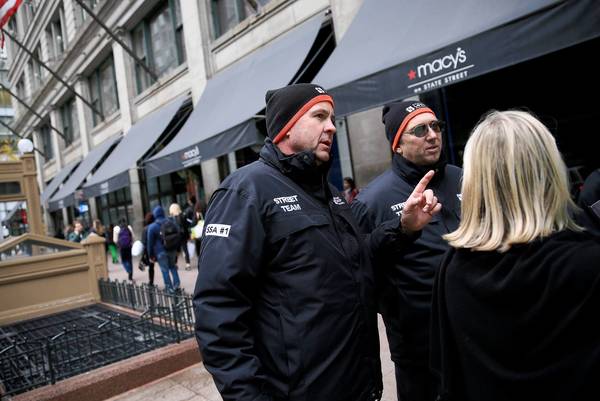 On a good day, William Brewer said tourists and shoppers toss $70 to $90 into his cup as he stands outside the Garrett Popcorn Shop near State and Madison streets in the Loop.

The 57-year-old, who stays in shelters at night, said he knows that some who solicit on State Street bother customers and merchants.

“I try to stay out of trouble,” Brewer said.

The area merchants association agrees there can be problems: Its surveys show that panhandling and the homeless are growing concerns to members and shoppers.

The Chicago Loop Alliance on Monday is launching a street team of six paid ambassadors they say will provide “extra eyes” on State Street to help social service agencies identify people who are homeless, addicted to drugs or mentally ill so that they can receive services.

“When you have to walk over somebody or past somebody asking for money to do your shopping, it isn’t the best situation for anybody,” said Michael Edwards, executive director of the Chicago Loop Alliance, a merchant organization that represents businesses in the Loop.

Business district street patrols are well-established in other cities, including New York, with generally promising results. The outreach efforts are credited with deterring crime and increasing pedestrian traffic, but have been less successful in keeping the homeless off the streets.

The Loop Alliance emphasizes that the program is not designed to “sweep” State Street of its homeless population, but the effort is raising red flags for some advocates concerned that the iPad-toting ambassadors are an attempt to rid the streets of citizens acting within their legal right to passively panhandle.

Chicago law bars panhandling “in a manner that a reasonable person would find intimidating,” including touching someone, blocking a pedestrian’s path or using profane or abusive language.

“I’m skeptical of this,” said Ed Shurna, executive director of the Chicago Coalition for the Homeless, which is not a partner in the project. “The goal is clearly to get rid of them. But we don’t feel you should dehumanize people by just sweeping them.”

A July 2013 analysis by the coalition which included data supplied by Chicago Public Schools found that 116,042 Chicagoans were homeless during the 2012-13 school year, up 10 percent from 105,338 a year earlier. That total includes people who have doubled up in other people’s homes because of hardship.

For its part, the Loop Alliance hopes fewer panhandlers will be good for business.

The Loop is attempting to rebound from the Great Recession, but the return hasn’t been easy. Edwards and other civic leaders are aiming to figure out what’s next for the business district and the State Street retail corridor, defined as State Street between Congress Parkway and Wacker Drive.

Officials estimate the 12-month cost of the program is $359,000. The ambassadors received 56 hours of training from a nationwide program called Streetplus, according to Edwards, and have met with social service partners and law enforcement along the way.

“The fact that they are reaching out to us, symbolizes that they want to do this right,” said Mark Ishaug, CEO of Thresholds, Chicago’s largest provider of services for people with severe mental illness. “It could have been focused on law enforcement or just moving people. But it was about engaging people.”

Agencies like Thresholds have had teams on the streets for years, Ishaug said, and the more help they can get the better.

“We’re enthused by any effort that enables us to help people on State Street or downtown or anywhere who are homeless or who suffer from mental illness,” he said.

City officials, whom Alliance officials described as partners in the project, could not be reached for comment.