80,000 Illinois residents were receiving long-term aid, and 36,000 others who would have received it next year will not qualify

Tawana Ward says her weekly $300 unemployment check is key to keeping her and her two sons afloat while she pursues a nursing degree part time and looks for work.

But that lifeline ended Saturday, when her checks stopped, along with those of 80,000 other Illinois residents receiving emergency unemployment insurance. The federal program, meant to help people who have been out of work for an extended period of time, ended after Congress didn’t reinstate it.

It also means that 36,000 people in the state who would have rolled on to the emergency program in the first quarter of 2014 no longer qualify.

“It’s a psychological adjustment,” said Ward, 32, a Chicagoan and former enrollment specialist at Robert Morris University, who lost her full-time job in March while taking classes toward her degree. “My boys say, ‘Mom, why can’t I do that anymore? Why can’t I do the things my friends are doing? Why can’t I do those things?’ I’ve had to educate them about me, the position I’m in.”

“I’ve had to change so many things: how often I go shopping, how often I eat out. It’s really at a point where it’s, ‘What do I do now?'”

The benefits program was a casualty of the bipartisan federal budget agreement reached this month.

State unemployment benefits typically last six months. But the severity of the economic downturn in 2008 prompted federal lawmakers to extend those benefits to cushion the blow for the long-term unemployed. In hard-hit states like Illinois, people could get up to 47 weeks of additional unemployment benefits under the federal program if they lost a job involuntarily. The amount of the benefit depended on their earnings.

The program has been extended 11 times and had not been allowed to lapse, until now. Republicans opposed extending the benefits, saying the checks keep people unemployed longer, which makes them less desirable to employers. They also express concerns about adding to the deficit for a program they say was meant as a temporary stopgap.

In addition, they say unemployment is easing, ticking down to 7 percent in November from a high of 10 percent in 2009.

But policy experts say those national figures obscure the fact that for a certain segment of the population, the job search has lengthened into years and some have dropped out altogether. Illinois has been slower to rebound, with an unemployment rate that’s 1.7 percentage points higher than the national average.

“What we’re actually saying to a big chunk of the labor force is, ‘We’re forsaking you. You’re done,'” said Robert Bruno, director of the Labor Education Program at the University of Illinois at Chicago. “We’re willing to write you off as a way to flush out of the job market people who’ve become a burden on the job market. It’s a terrible outcome for those individuals and a pretty mean-spirited choice.”

In Cook County, where 38,260 lost their benefits Saturday, many job seekers have been laid off from industries that aren’t expected to bounce back or at least not quickly enough, Bruno said. Manufacturing cuts in the area, along with Dominick’s stores closing, are placing an unusually large number of people in the job market without similar jobs to turn toward. That means longer job searches.

And although the potential for new oil and gas drilling jobs in late 2014 could be a boon, those jobs are mostly expected downstate.

“The system is being flooded with people who are desperately in need of support and services,” said Karin Norington-Reaves, CEO of Chicago Cook Workforce Partnership, the second-largest administrator of federal job training funds in the country, serving 140,000 people annually at its centers. “That bridge money helps to pay bills, it helps to keep folks in their homes, it helps to keep food on the table. It’s not as though these dollars are superfluous.”

Policymakers also are looking down the line to the first quarter of 2014, when an additional 32,000 Illinoisans who would have rolled over to emergency benefits will not be eligible.

Studies show that the longer a person is out of work, the more difficult it is to find a job. Once they do find a job, it is likely to be at a significantly lower wage.

“It’s challenging, because when you look at what they’re paying and you total it out, (potential employers) are really just paying me gas money to get to the job,” said Ward, who has been working with the Chicago Urban League for job leads. Ward, for example, said she has been applying for positions as a certified nurse aide, which pay $9 an hour, less than half of what she made when she was employed.

The job search becomes even more difficult for older workers and for those in niche fields, says Joy Maguire-Dooley, director of family services at Lisle Township, where she runs a program called Job Club that aids job seekers with resume writing and job-seeker workshops.

“The harder you work, the luckier you get, but there’s some people that are really working the plan and just not at the right place at the right time. It’s really hard to not get down on yourself,” Maguire-Dooley said.

For instance, 57-year-old Grant Iannelli in Lombard has the kind of niche profession and circumstances that could lead to a longer job search. He was laid off in September after 25 years at the same university where he ran a chiropractic practiceand conducted clinical teaching work for future doctors.

Between the money he is paying for health insurance for himself, his wife and his two children and his mortgage payment, he said his unemployment check of $470 a week is pretty much tapped. He hasn’t exhausted the standard 26 weeks, so he has some time.But those benefits will end in February without the extension.

With a mother with advanced Alzheimer’s 2 miles down the road, he isn’t in a position to move to where the jobs are.

He’s working with a career coach at Gray Hair Management, which provides outplacement services, to help him market his skills to the corporate world rather than to academia.

“It could be with an insurance group, pharma, medical devices, anything where I can take my clinical experience, my experience in quality management and carve a niche for myself,” he said.

While losing unemployment benefits can be difficult for job seekers, experts say it can also create a drain on the economy.

According to the Illinois Department of Employment Security, every dollar of unemployment insurance generates $1.63 to $2 in economic activity.

Kingston, Ill., resident Jeanne Pfeiffer, 47, lost her emergency federal benefits Nov. 8 after losing her job as an information technology project manager in June 2012, when she was making a near-six-figure salary.

The sudden drop in pay meant she severely cut back on Christmas spending and has been spending less money on groceries. She had to dip into her 401(k) to pay her mortgage on her home, about 60 miles west of Chicago.

“I’m trying to be responsible. I’m trying not to dip into my savings,” she said. “But I’m not working and my husband doesn’t make a lot.”

Tawana Ward, seen at home in Chicago with her son Imanuel Webb, cq, on Friday, December 27, 2013, will see her unemployment benefits expire on December 28, 2013. She’d been using the unemployment checks to support herself and her two sons, 16 and 10, while she went to nursing school part-time. (Terrence Antonio James, Chicago Tribune) 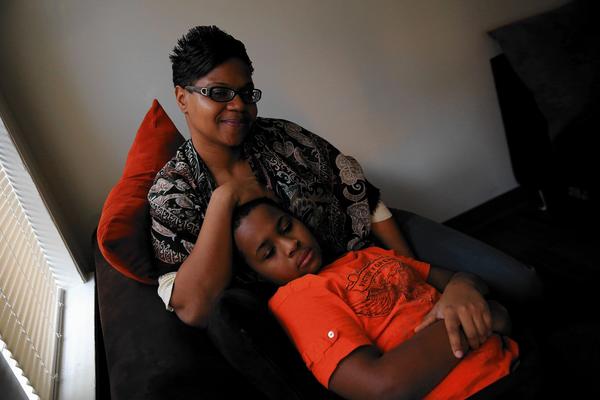