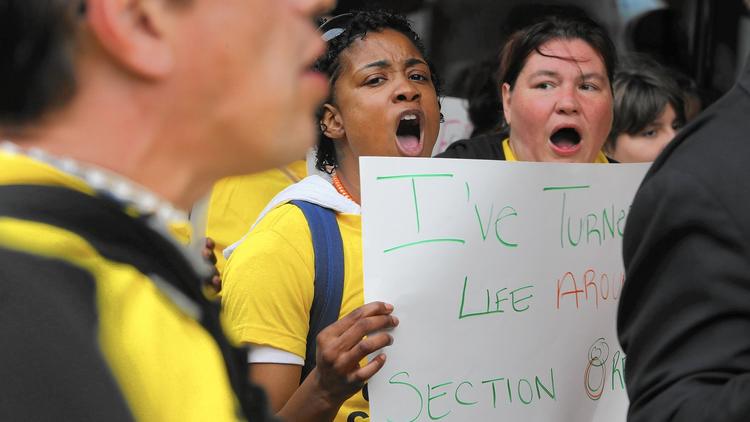 Editor’s Note: This article includes mention of a CCH Re-Entry Project event, which mobilized 135 ex-offenders to march to CHA headquarters to announce their plans to apply for housing assistance. Photo (above) depicts part of the march. (Tribune photo by Antonio Perez)

For most of his adult life, Clifford McKnight has bounced from house to house sleeping on relatives’ couches, sharing bedrooms and crowding into small apartments to have a place to rest his head, he said.

On Monday, he joined more than 80,000 Chicago residents who applied for housing assistance from the Chicago Housing Authority, after the CHA opened its wait lists for new residents for the first time in more than four years.

Agency officials expect more than 250,000 families to apply for spots on three waiting lists — one for public housing, one for housing vouchers and one for apartments in privately owned subsidized housing,

“We don’t have a set number of slots available. … We can’t predict how long people will be on the wait list,” said Katie Ludwig, a deputy chief housing officer at the CHA. “We are getting to the end of our (current) wait lists, and we thought it was a great opportunity for people who are in need of housing. We thought we’d open all three lists at the same time. It’s something we’ve never done.”

The agency will take applications through Nov. 24. Applicants can fill out the paperwork online or can go to agency-designated community centers for help. Once applications are in, the agency will conduct a lottery to determine who will go on the wait lists, Ludwig said.

Having their name on a list at the agency does not guarantee housing. It is simply one step closer to participating in the agency’s programs. Historically, the CHA has had wait lists that surpass 15,000 families for each of its programs, records show.

Residents can wait years to be called in for housing.

Still, the current move comes as the agency has been under fire for not doing enough to house the city’s poorest and most vulnerable populations. In July, a report from an independent think tank revealed that the agency had banked more than $355 million rather than use the money for housing. Local officials and the U.S. Department of Housing and Urban Development have pressed the agency to serve more people.

For more than a decade, the CHA has pushed to remake public housing with its Plan for Transformation, an ambitious project in which the agency demolished dozens of decaying public housing high-rises that once were symbols of poverty and violence. But the agency has fallen years behind schedule, and critics say it has not done enough to replace that housing. The agency subsidizes housing for 40,679 residents through a voucher program, but thousands more are in need.

“We’ve seen a very strong increase in housing insecurity,” said Kevin Jackson, executive director of the Chicago Rehab Network, an advocacy group that pushes for affordable housing. “This is a trend that virtually happened across the country, but significantly here. We saw household incomes decline here in Chicago. But the cost of housing has actually increased.”

Although he works driving a truck for a private moving company, McKnight, 45, doesn’t earn enough to afford an apartment on his own, he said. So he has to live with relatives to keep off the streets.

“I’d like my own place, and I’d like to do better for myself,” he said. “But the housing here is real high. If you don’t have a full-time job — two of them — you won’t make it.”

As the wait list opened, nearly 100 residents staged a protest at the CHA headquarters to push the agency to allow more former offenders access to housing subsidy programs. The CHA allows some ex-offenders to live with relatives, and it lets residents with a criminal past apply for their own homes. Typically those residents go through more scrutiny.

Lenora Mock, 59, lived in her own home on the West Side for close to eight years thanks to a voucher, she said. But in 2000 she was arrested for aggravated battery after an argument turned violent. She served six months in prison and lost her voucher. Now, she said at the protest, she’s sleeping on a mattress on her daughter’s living room floor but hopes to get back into public housing.

“My daughters won’t let me be on the streets,” Mock said, “but I’m here and there.”