Editor’s Note: A new SRO preservation ordinance is being developed through advocacy by Chicago for All, a coalition led by ONE Northside. Partners include Chicago Coalition for the Homeless, Metropolitan Tenants Organization and the Sargent Shriver National Poverty Law Center.

Chicago is calling for a six-month moratorium on conversions of single-room occupancy hotels and residential hotels while it tries to figures out how to regulate the gentrification that has put thousands of very-low-income housing units at risk.

An ordinance that would prohibit for six months the issuance of any city building permits for the demolition or conversion of the buildings is expected to be introduced at Wednesday’s City Council meeting by Mayor Rahm Emanuel and several aldermen.

The moratorium would prevent almost all conversion projects, whether it was to a residential, non-residential, commercial or industrial use. Building permits still would be issued for routine maintenance and improvements, but that’s not what has taken place historically.

During the past three years, more than 2,200 rooms in residential hotels have been converted by developers into higher-priced apartments. The city estimates that another 6,000 units are at risk.

“It’s a temporary solution,” said Mary Tarullo, a senior organizer at One: Northside, a community group based in Chicago’s Uptown neighborhood, where many conversions have taken place. “It’s not a long-term solution but it gives us a necessary step in the process of working on a long-term ordinance.”

Among the options being looked at are financial incentives for existing building owners to maintain and upgrade their properties, as well as for both non-profit and for-profit firms that want to acquire the buildings. Non-profit developers have had a difficult time competing with for-profit firms because of the costs involved in a building’s acquisition and extensive rehab.

“What we’ve heard is this is a really complicated issue,” said Michael Negron, chief of policy in the mayor’s office. “In the meantime, there’s enough concern out there that with no structure in place, there are buildings that could be converted and people kicked out and people lose their housing.”

An ordinance, if adopted, would not affect Lawrence House, a 1920s Uptown building bought last year by Cedar Street Cos., which has acquired eight buildings in Chicago and renovated them into market-rate rentals under its FLATS Chicago brand. Lawrence House’s design and size falls outside the definition of single-room occupancy and residential hotels.

The city is aiming to introduce a permanent ordinance covering conversions in September, and is meeting with community groups, aldermen and developers to  seek their input. “The reason we’re doing this is to make sure we have the time to work with them, to strike a good balance between good economic growth throughout the city but that doesn’t harm people who might not be able to live in their buildings,” Negron said.

A man walks through scaffolding at the front entrance area of the Lawrence House apartment building, 1020 W. Lawrence Ave., on May 23, 2014, in Chicago. A new ownership of the building has resulted in eviction notices for all residents. 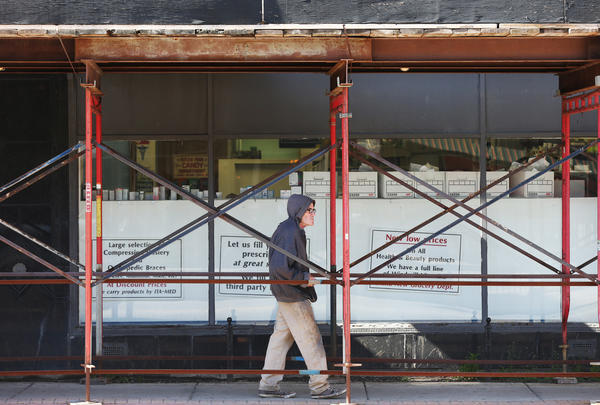