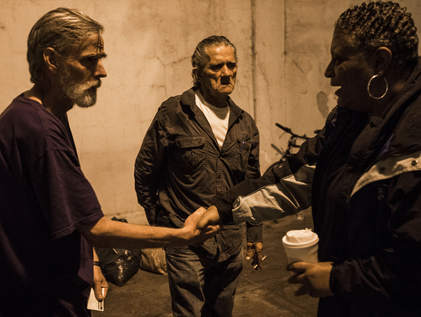 With the rain falling Monday night, the homeless people who stay along Lake Shore Drive in Uptown were easy to spot, gathered under the viaducts to stay dry instead of sleeping in the park.

Word was the city was planning to show up late to remove them again, so many had split to parts unknown to avoid the hassle, but a couple of groups decided to stick it out.

At Lawrence Avenue, Mike and Jeff, who prefer to keep things on a first name basis, had gathered their belongings neatly in bags to be ready to move in a hurry if the police came.

“You’ve got to be like a soldier. Keep your stuff together. Travel light. Don’t carry more than you need,” said Jeff, who will turn 56 in a couple weeks.

Jeff could pass for your next door neighbor or the guy sitting next to you in church, but he suffers from bipolar disorder, among other things, and volunteers that his brother shot himself in the head on Jeff’s 18th birthday.

Jeff, who is originally from Kalamazoo, Mich., said he has been living out here on the streets since February when a two-year housing grant he’d received through Catholic Charities ran out. He’s had difficulty lining anything else up.

Mike, 61, has been out here since March when he was released from prison. Together with a disabled veteran whose name I didn’t catch because he was off panhandling in the rain, the three team up to watch each other’s backs.

Mike, who says he’s spent his whole life in Uptown, is hoping to land a place in CHA senior housing next year when he turns 62.

Mike chain smokes and has some sort of breathing disorder that makes it sound like he’s always growling, but he and Jeff are exceedingly polite and proud that they have picked up the trash in their area.

I mention to them that I’d been out here a couple weeks ago when people were pitching tents in the park.

“This is not a campground. This is a lake,” growls Mike, which I get a kick out of because it’s exactly the sort of sentiment you’d expect from a homeowner in the neighborhood.

Over at the Wilson Avenue viaduct, one of the regulars I’d met out here two weeks ago was noticeably missing.

The homeless people told me Ronald Scotti, a voluble but friendly fellow who has his own prison record and mental health issues, had gotten in a fight and received some serious head injuries. One version had him in the hospital, the other in jail, which is somewhat ironic because just a few days before his arrest he told that he’d not only done time, he’d “done enough time.”

Records show Scotti had actually been released from jail earlier Monday after the battery charge on which he had been held was dismissed. He probably just hadn’t made his way back to the North Side yet, which got me to wondering how upset he’d be if Streets and Sanitation came by and tossed his stuff while he was gone. Possibly mad enough to get arrested again.

I asked Scotti’s friend, Rex, what he and the others would do if the city came to move them.

“Scatter,” he said with a wave to his surroundings. “Scatter.”

Shortly before 10:30 p.m., some outreach workers from Haymarket Center rolled up under the Lawrence viaduct and asked Jeff and Mike if they’re interested in entering their substance abuse program. They weren’t.

A Park District security officer joined the group, then a van full of social workers from the city’s Department of Family and Support Services, the agency that oversees the city’s homeless programs.

The tension rose a notch, but it soon became clear this was a friendly visit. No police or garbage crews on this night, which seemed to disappoint the Park District guy.

A DFSS supervisor asked the men what she could do to help get them off the street. They each told her enough of their story to make clear there were complications, but she promised to follow up.

Back over at Wilson Avenue, one of the social workers recognized one of the homeless men seated on the sidewalk.

“Frank, you ready yet?” she called out.

“No, it’s still warm out,” Frank answered with a wry smile.

“We’re safe. We’re happy. Can we stay here?” he responded.

“Yes,” she told him, and everyone relaxed a notch.