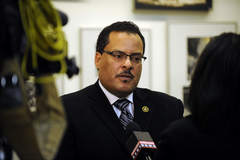 He devoted his newsletter to an honest discussion of his approach to the problem of homelessness. And he did so without trying to tell everyone what they want to hear.

There are a lot of homeless people living in the 35th Ward, which includes the Logan Square and Avondale neighborhoods.

The most visible ones sleep under the Kennedy Expressway, which cuts through the ward at an angle so as to produce lots of handy places where a homeless person can take refuge or panhandle. Others hang out in the alleys behind Milwaukee Avenue.

These homeless people are much too visible for some of Colon’s constituents, who demand that he remove them, whatever it takes.

So far, Colon has been unwilling to go that far, preferring a humane approach that recognizes his responsibilities to everyone living in his ward, not just the ones with roofs over their heads.

“While most people have compassion for those who are less fortunate or living in poverty, I have also seen the limits of that sympathy,” Colon wrote in his message to 35th Ward residents.

“I receive numerous complaints about the very presence of homelessness,” he continued. “Homeless people are regularly blamed for being in their situation. I am also often asked: ‘What are you going to do about the homeless problem?’ or ‘When are you going to get rid of the homeless?’ ‘Isn’t it illegal to loiter and ask for money? Why don’t you have them arrested?’”

It’s a tough spot for an alderman, any alderman. When constituents identify a problem, it’s the alderman’s job to fix it — or be willing to face the consequences at the ballot box.

Colon understands why residents are upset when intimidated on the street by a homeless person who is mentally ill, or when they find someone sleeping in the gangway or discover human excrement behind the garage.

But the problem of homelessness isn’t so easily solved as a call to 311 to repair a pothole or schedule an extra trash pickup. Colon tried to explain that.

He listed some of the many causes that can make a person homeless: lack of access to long-term mental health treatment, redeveloped neighborhoods with a shortage of affordable housing, personal economic crises, domestic violence and more.

And he wrote about the steps the city is taking in conjunction with social service providers to get homeless people off the street, including its vaunted “wrap-around services.”

But, he acknowledged, “As a society, we have barely made a dent in solving the root causes of homelessness.”

In a particularly risky move, Colon challenged residents to see that solving this problem is bigger than any alderman.

“We all have a responsibility to own some of the problems that we see. The only thing worse than being homeless is looking the other way when it’s right in front of you,” he wrote.

I called Colon on Tuesday to compliment him. He wasn’t looking to take any bows.

“It’s not like I’ve got any solutions,” he said. Maybe not, but he’s not adding to the problem either.

Colon explained he wrote the letter mostly to ask residents for “breathing room” as the city tries to improve its efforts. He said he and his staff already work to move homeless people into drug and alcohol treatment programs or into temporary housing.

Every Tuesday, Colon sends a city cleaning crew to sweep up and scrub down the homeless encampment beneath the Kennedy at Belmont and Kedzie, the source of most of his complaints. The homeless people just pick up their stuff and move down the street for a few hours, and when the cleaning crew is done, they move back.

“Within a short time, it looks like nothing ever happened,” he said.

Colon admits the city doesn’t have the resources it needs to offer housing for everybody who is homeless, even if they all wanted it. Some do not.

He acknowledges that the tensions over homelessness have grown as Logan Square has become more affluent, ushering in a more “assertive” group of residents who want him to take a more “hard-handed approach.” For now, he is resisting.

“These are people. It’s not like a bunch of pigeons under the expressway,” Colon said.

Disclaimer: Any similarity to events or people depicted in this column with recent activities in any other ward is purely coincidental.