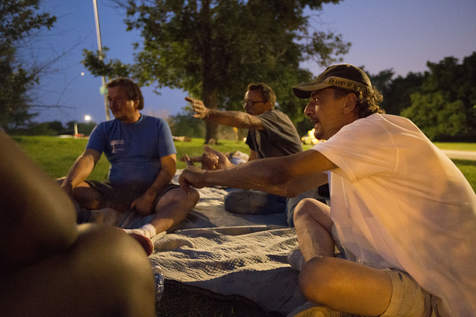 It was sometime after 1:30 a.m. Tuesday when Chicago police swept the homeless people out of the park along Lake Shore Drive in Uptown, ordering them to pack up and move along or face arrest.

The homeless people did as they were told, and nobody was arrested or had their belongings confiscated, not even the tents that seemed the main object of concern.

Neither was anything accomplished, except for costing 15-20 homeless people a few hours sleep.

If you read Tuesday’s column, then you’re thinking to yourself: But Brown, you said they called off the homeless sweep after you started poking around. What happened?

I posed it Tuesday to Evelyn Diaz, commissioner of the Department of Family and Support Services.

“What we told you yesterday is what happened, except there was a little kink in it,” Diaz explained.

You may recall it was Diaz’ first deputy who assured me Monday the city had postponed its planned late night “homeless outreach” involving police and Park District personnel because officials wanted to give the homeless more warning, which they say is their policy. Rather than just give those sleeping in the park the boot, they would first send in a team of social workers to offer help in finding shelter.

That was about eight hours before the homeless people I interviewed say police showed up with no warning, woke them up and ordered everybody out, which is certainly lawful under the park’s official 11 p.m. closing time but ultimately self-defeating.

Diaz told me the city did send in social workers alone to give the homeless people advance notice of the impending crackdown.

But that’s where the “kink” developed.

According to Diaz, a two-person team from Catholic Charities went to the park at 1 a.m. and was engaging homeless people to offer services when a few individuals became “aggressive” and “combative” and “caused my team to retreat.”

After that, they conducted the rest of their “outreach” with the police, who took charge and ordered everyone to leave the park, while offering them a ride from Catholic Charities. All the homeless people declined, seeing as how the only option was to go to Pacific Garden Mission, which most of them try to avoid.

“We know that the outcome was unfortunate,” Diaz said, while also defending the decision of those who called police.

Sun-Times photographer Alex Wroblewski and I had been in the park a few hours before the sweep began when we met some of the people pitching their tents, which is why one of them called later to alert me.

The homeless people I found disputed the city’s version of events, saying they were awakened from their sleep by police on foot with flashlights who ordered them to leave. The homeless made no threats, certainly not against the Catholic Charities workers, who didn’t approach until after the police were on the scene, they said.

Look, it’s certainly possible both are correct and the people with whom I spoke weren’t the individuals the social workers first encountered. I met a few people in the park Tuesday who I have no doubt would have reacted with hostility — as would most people rousted from their sleep in the middle of the night.

The homeless tents popped up just after dark Monday. You had to look hard to find them in a stand of trees just south of Lawrence on the west side of Lake Shore Drive.

One belonged to John Ryder, 54, who said he has been staying in the park with his son and his son’s pregnant girlfriend for about a month since losing his Uptown apartment after the building was rehabbed.

Ryder said he needs to stay in the park until the first of August when his new apartment lease starts. Until then, he said, he moves the tent often to avoid unwanted attention from neighbors.

On Tuesday, it was an angry Ryder who said, “Somebody’s lying to you,” after I told him about the social workers saying they were threatened.

Patricia Nix-Hodes, a lawyer with the Chicago Coalition for the Homeless, said the agency is concerned about how the city conducts its homeless sweeps.

“These types of actions create more problems than they solve,” often leaving the homeless more vulnerable, she said.

Diaz told me the city still plans to carry out its homeless “outreach” (crackdown), but promises “fair warning” this time.