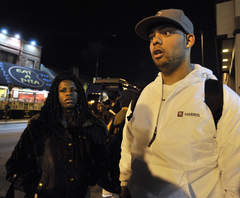 (Working with the HELLO youth group it co-runs with The Night Ministry, CCH advocated for city funding that supports The Crib. The overnight youth shelter first opened in January 2011, and reopened last fall.)

It’s 9 p.m., and 26 young men and women have shown up at the Crib, a shelter for homeless youth in the Lake View Lutheran Church at Addison and Halsted.

Which is a problem, since there is space for only 20 foam mattresses on the floor of the cinderblock community room where they will sleep.

Or in spring when it feels like winter — it’s 42 degrees outside tonight. So staff from the Night Ministry, the nonprofit organization that runs the shelter, along with many other outreach services, feeding and providing for Chicago’s downtrodden, does what they are forced to do most cold nights: turn people away.

“There’s a lot of you here tonight,” announces staffer Hope Benson, after quieting down the commotion. “We start a new intake process today. When I came outside I noticed there was a lot of running. There’s no need to run. Intake is between 8:45 and 9 o’clock. You can be here between that time and we’ll still let you in. Okay? If there’s more than 20 people, then we’re going to do a lottery, like we’re going to do now.”

There is a burst of protest, excited conversation and drama, with nearly everyone speaking at once.

“Yesterday was first come/first serve,” says one. “What happened?” “This is messed up!” says another.

They are black, white, Hispanic, male, female. All under the age of 24. They sit on chairs, stand against walls, slump on the floor, their possessions piled around them.

Darnell, a powerfully built 19-year-old with aqua-painted fingernails, clutches a pink stuffed monkey to his chest. “This is J-Moe,” he says. About 70 percent of the youth who stay at the Crib are gay, lesbian or transgender, and there is a direct connection between homosexuality and homelessness among the young.

“Youth are coming out at a much younger age — 12, 13,” says Paul Hamann, the Night Ministry’s CEO and president. “Youth see society being more accepting and are willing to come out early, but the family might not be ready for that, which sometimes puts their housing in danger. It’s a little paradoxical.”

Nor does anyone have an idea how many homeless youth are in Chicago or in the country. “There are no numbers out there,” Hamann says.

“Can I say something please?” says Leo, 19, standing up. “M—–f—— who have somewhere to go, who think the Crib is just a hangout spot, get the f— out, because there are people who really need this place. I’m just saying. You all being selfish.”

A common complaint: Other people don’t need it but I do. Also theft.

The six whose names don’t get picked get CTA cards with $2.50 — one fare — on them, and they’re lucky to get that; somebody has to donate the cards to the Crib, which began as a pilot program with the city of Chicago in January 2011, ran for four months, was closed, then re-opened in September. Its future is uncertain.

“We are trying to come up with additional funds to keep it open year-round in a very, very tough funding environment,” says Hamann. (The Crib receives donations at the Night Ministry, 4711 N. Ravenswood, 60640, or at thenightministry.org).

The fare cards are last-resort housing. “Most homeless people, at night time they sleep on the train,” explains Conrad Burnett, 22, who sometimes does that. “It’s an hour and half, two hours from 95th to Howard, back and forth and back and forth. It’s warm on the train. You get used to it, sitting up sleeping. You gotta hold all your bags. They’ll cut your pants and take what’s in your pockets. They took my shoes one time.”

Though warm, a night on the train isn’t an appealing prospect.

“I have nowhere to go!” complains Tobias, 22, a muscular young man with a slight beard and an earring. Homeless almost a year, he stops at the door to argue, loud and long — they shouldn’t use the lottery, they should keep the old system. “You knew I was here!” he shouts over staffers. “No! No! You’re not listening to what I’m saying! The first 20 who got in are the first 20 who are supposed to stay in!”

“We only have 20 spots,” says Benson, explaining the need for a change. “People push past others. It’s dangerous. People get hurt.”

Getting nowhere, Tobias kicks angrily at the crash bar on the door. It locks behind him and he is standing on Addison Street, holding a bag of pumpkin seeds.

Joddy, 18, kisses her boyfriend, Dougie, 24, hard, then quietly leaves — he was picked; she wasn’t. She walks a block west, uses her fare card to get into the Addison Street L station, where she stands on the platform, a slight girl in a red-plaid hooded sweatshirt, pressing herself against the wall, looking scared.

“What am I going to do?” she cries, tears rolling down her cheeks. “I don’t know where to go.”

She won’t say why she’s homeless. “That’s confidential to me.”

Nor will she risk riding the L all night. She’s done that before.

“It’s sometimes dangerous, especially if you’re a girl,” she says. “There’s a lot of guys, who’ll just hit on you. It’s dangerous. It’s not easy. You get scared, because it’s late, and you don’t know where to go.”

Joddy grew up in Humboldt Park. “I’m mixed, I’m a lot of races — Native American, Puerto Rican, Irish.” She has been homeless since she was 16 and went to Evanston Township High School. “I couldn’t finish. I had to drop out,” she says.

She insists that she and her boyfriend watch out for each other. “We have each other’s back.” But she couldn’t let him pass up his spot at the Crib to stick with her on the streets. “He can’t — I can’t let him do that,” she says. “He suffers more than I do.”

So what is she going to do?

“I don’t know. Walk down North Avenue. It’s actually a lot safer there than a lot of places…. I tend to walk a lot. Every day. Once I walked almost eight miles.”

She talks about the various North Side youth services and shelters she uses, and how homeless youth are sometimes treated.

“I been in Chicago my whole life, and I’ve been growing up around here, and I’ve grown up to see everything,” she says. “I’m a very observant person. I see everything. I don’t have to say anything. But I see it. And I see how they disrespect everybody. Everybody who doesn’t look rich or doesn’t have class.”

She has ambitions. “I’m a really good artist. I can draw,” she says, hoping to be “an artist maybe, a comic book artist.” But she sees how she and her friends are viewed by many in society.

“Homeless people are human too,” she says. “We got lives, too. Just ’cause you have money in your pocket, just ’cause you have clothes on your back and a job doesn’t mean that you can go ahead and say that a person’s not human. That person has feelings, too. That person went through b—s— too. We went through abuse. We went through all this s—, and you know why? Because it’s people that hurt people. It’s not people who do this to themselves. Especially the young ones, who don’t even deserve this. And that’s coming out from some real experiences of my own. You can’t just say people are not people because they don’t have anything. Nobody has everything in the world. Nobody is perfect.”

The train arrives. “Belmont is next” the canned voice calls. “Doors open on the right at Belmont.” She walks onto the train and is gone.