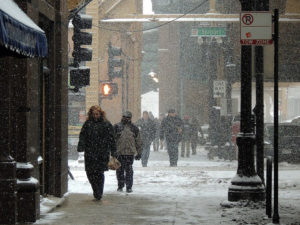 It’s proving a stark reminder that, as a prosperous city, we must do something substantial to end the homelessness that impacts more than 80,000 children, youth and adults in Chicago.

“The steps that the city of Chicago and its partners are taking to provide shelter and warmth to people experiencing homelessness in this weather are critical,” said Executive Director Doug Schenkelberg.

“I hope the sense of urgency that is being felt now continues past this moment, so that those in power put the funding in place to provide the permanent housing our city needs so that no one is forced to be homeless in any type of weather.”

Some overnight shelters are running 24/7 schedules until Friday, including youth shelters run by The Night Ministry (The Crib) and La Casa Norte.

The city designated five CTA buses to act as overnight warming centers, including buses stationed at Des Plaines and at Columbus Drive.

The city also operates a network of warming centers across the city that includes the libraries, police stations and park district facilities.

Chicagoans should call “3-1-1” for weather-related help in frigid winter weather, including information or access to homeless shelters or city warming centers. In emergency conditions, including concerns about someone struggling on the street, call 9-1-1.

Lyft is offering up to two free rides to Chicago warming centers, up to $25 per ride, through Friday at 11:59 p.m. to those using the code CHIJAYDEN19.

In the suburbs, people can contact police non-emergency numbers to ask about warming centers, many of which are housed in police station lobbies and libraries. Cook County maintains a list of suburban warming centers, with statewide information at www.keepwarm.illinois.gov

StreetLight Chicago, a free mobile app for homeless youth, provides service alerts and lists resources that serve unaccompanied youth through age 24. The free app can be downloaded from iTunes or Google Play.

Supported by the VNA Foundation, the app is maintained by the Young Invincibles and the Youth Futures legal aid clinic at the Chicago Coalition for the Homeless. A desktop version is at http://www.streetlightchicago.org

Circuit courts in most Illinois counties, including Cook County,  have announced they will be closed Wednesday and Thursday.

Circuit Court of Cook County has advised that anyone with a court date on Wednesday or Thursday should monitor the mailing address used for court to find out when their case is rescheduled. Information about rescheduled cases can be found in the court’s General Order: http://www.cookcountycourt.org/Portals/0/Portal/GAO%202019-02.pdf.

In Aurora and in the north Cook and Lake county suburbs, expanded outreach, shelter and warming center options were outlined by the Daily Herald.

Chicago Coalition for the Homeless invites the public to work with us to find permanent solutions to homelessness. Learn more about our Bring Chicago Home campaign.

Time: ‘I thought I was going to die.’ How Chicago’s 80,000 homeless people are surviving in deadly zero-degree weather

Chicago Tribune: Riding with the Salvation Army as they try to bring Chicago’s homeless in from the cold

CBS Chicago: Chicago Pedway offers shelter from extreme cold to those most at risk; ‘I just got to do it, because I need my rent money’

Chicago Sun-Times: Checking on homeless as subzero temps loom – ‘They like that we just show up.’

Fox32 Chicago: City agencies, nonprofit groups scrambling to get Chicago’s homeless off the streets due to weather

WBEZ: Out in the cold – where do Chicago’s homeless go in the winter?