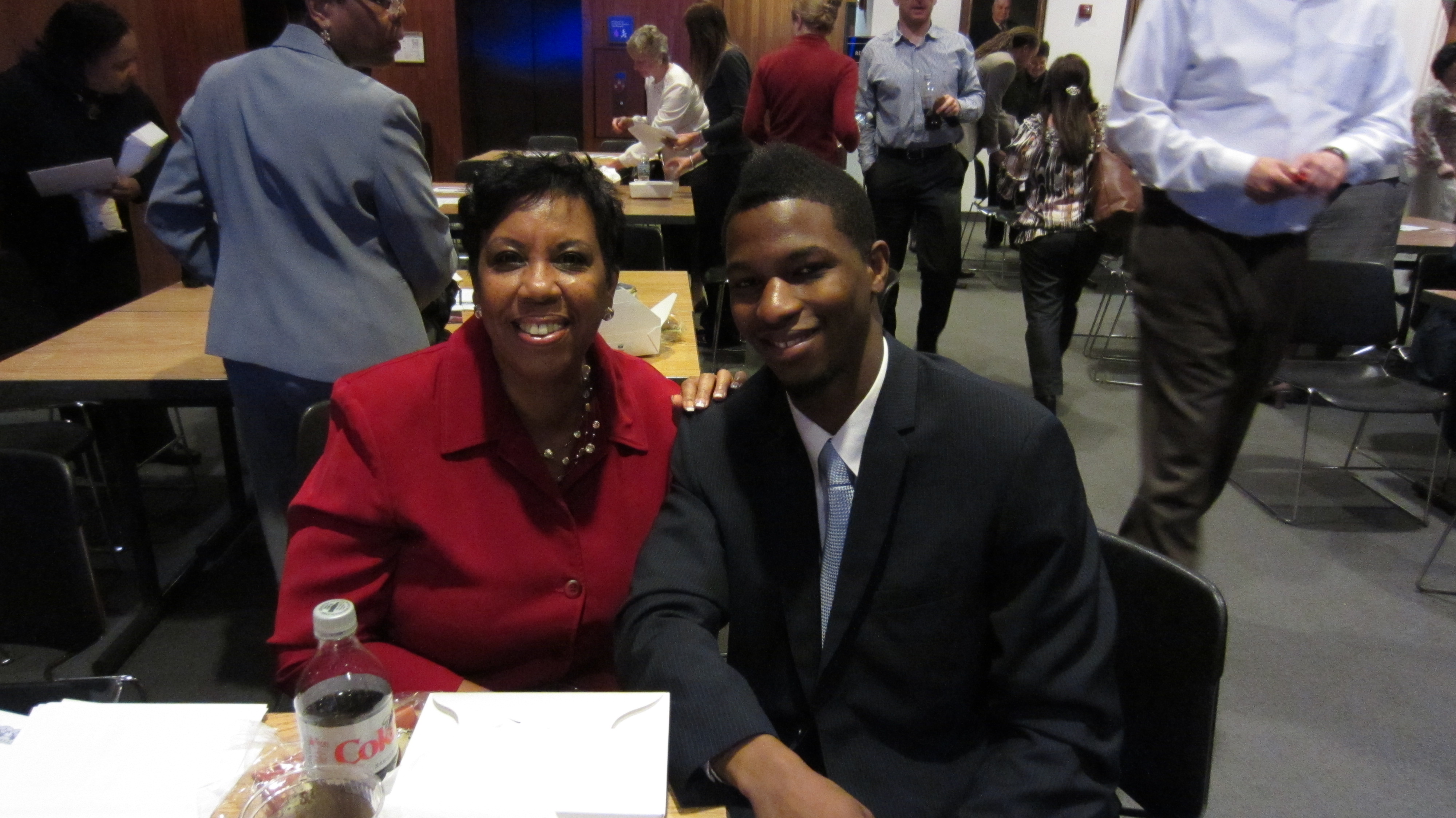 Every Child in School, Every Day, an outreach project based in the Austin neighborhood, kicked off its fourth year of collaboration by the Chicago Coalition for the Homeless and volunteers from JPMorgan Chase Bank.

“I’ve seen a lot of faces of people here who have come and done outreach with us, sometimes in the rain, and I see the impact they are making,” said Sharlita Davis, a CCH Board member who coordinates the outreach project for Chase.

The Austin outreach project has been a signature project of Chase’s Legal & Compliance Department, where Ms. Davis serves as Assistant Vice President and Contract Officer in the IP & Technology Law Group.

Forty-three Chase employees from a variety of bank departments attended a lunch kickoff Tuesday in the downtown Chase Auditorium – some to learn about the project for the first time, others to resume another year as outreach volunteers.

Made possible by generous grants from the JPMorgan Chase Foundation, the project reaches out to homeless families and students in Austin, a West Side neighborhood with 27 public schools. Since 2009, CCH staff and volunteers from Chase have done extensive summer outreach in Austin, distributing thousands of door hangers, posters and informational brochures to explain the school options available to homeless children and teens.

In the project’s first three years, the enrollment of homeless students in Austin public schools has almost doubled, from 376 in 2008 to 732 in December 2011, a 94% increase. Last year, 50 Chase employees volunteered to do outreach, 30 of them at least twice. In addition, 55 law students from Loyola, Notre Dame, Northwestern and the University of Iowa helped CCH distribute materials last summer and fall.

Also participating in Tuesday’s event were key staff from the Chicago Public Schools (CPS), Jennifer Fabbrini, transit coordinator for the Students in Temporary Living Situations office, and Andrea Hall, senior manager for the Office of Family and Community Engagement.

Ms. Hall voiced support for the project and committed to having CPS organizers help distribute the Chase-produced outreach materials in public schools throughout the city.

“Education was my key to success.  No one can take education from you,” said Ms. Hall, speaking of her own experience as a homeless teen. “If I never got an education and people didn’t believe in me, I wouldn’t be here today.”

The event was also an opportunity to recognize outstanding Chase volunteers who have shown consistent support and energy for the project. Among them was Ophelia McGee, a Chase staffer in customer mail services. Ms. McGee has participated in every outreach event since the project began.

“Volunteering with the project is very humbling,” said Ms. McGee.  “Each time, I get more out of it than I put into it. The experience is unbelievable. It is a joy and pleasure to participate.”

Every Child in School’s next outreach day, set for Thursday, May 31, will focus on preschool enrollment and access to fee waivers. Smaller outreach days are held throughout the summer, including at Taste of Austin, with a large back-to-school outreach day planned for late August.

“We always feel people here care and care enough to do something about it,” said Laurene Heybach, director of the CCH Law Project.

Volunteer Lela Cetoute also urged her fellow Chase employees to get involved: “Just give of yourself.  Just come. This is our purpose on earth: to help others.”