Chicago Coalition for the Homeless honored eight political and governmental leaders on Aug. 7, and while pausing to celebrate the victories of this year, those in attendance also looked ahead to the work that still needs to be done.

“People ask me what CCH does,” said Ed Shurna, Executive Director. “I say we change lives. We organize hope. And we move people from pain to power.”

Michelle Saddler, secretary of the Illinois Department of Human Services, was presented with CCH’s special John “Juancho” Donahue Award. Named for CCH’s late executive director, Ms. Saddler worked closely with Juancho as president of the CCH Board of Directors, on which she served almost 10 years.  As IDHS secretary for five years and a former chief of staff to Gov. Pat Quinn, Ms. Saddler is honored for her dedication to serving poor and vulnerable citizens of Illinois.

“To me, the Coalition is about the opportunity for all of us to make a difference,” Ms. Saddler said.

CCH also recognized two legislators for their support of the Unaccompanied Minors Access to Basic Healthcare Act, authored and advocated by CCH youth staff this spring. State Rep. Greg Harris and State Sen. Heather Steans (both D-Chicago) were cited for their sponsorship of the new law that will allow unaccompanied minors, ages 14 to 18, to consent to their own non-emergency health care.

Until the minor consent law takes effect October 1, minors who lack a parent or guardian to approve treatment are turned away from health facilities, including Chicago’s school-based clinics. Statewide, more than 7,000 minors who live on their own, without a parent or guardian, will be able to access care for common illnesses and ailments, such as strep throat, asthma or a sprained ankle.

“We need more resources in the system, and I appreciate all the work you [at CCH] do,” Sen. Steans said.

CCH also commended Rep. Harris for his strong support of homeless youth and homeless services, working to insure that Springfield leaders do not cut services, even amid a state budget crunch. In the state’s FY15 budget, homeless youth programs were funded at a record $5.6 million, a $1 million increase from last year.

Meghan Harte, deputy chief of staff to Mayor Rahm Emanuel, was honored for her work with CCH’s Re-entry Project, helping CCH work with the Chicago Housing Authority to enact the re-entry housing pilot program. Under a three-year pilot endorsed by Mayor Emanuel, several re-entry service providers could certify up to 50 formerly incarcerated adults to rejoin their families in public housing or subsidized housing. Currently, under local CHA rules, most ex-offenders must wait at least five years.

“She has worked so closely with us to craft a strategy and a message,” said Rachel Ramirez, Community Organizer for CCH who is working on the Re-entry Project. “She really took the time to listen to the struggles that those with a criminal record face.”

Additionally, CCH honored Cook County Board President Toni Preckwinkle and Richard Monocchio, executive director of the Housing Authority of Cook County. Both were commended for leadership in enacting the three-year re-entry pilot in suburban Cook County this fall. Ms. Preckwinkle also was cited for the new Cook County Land Bank, which will restore some of the 55,000 vacant and foreclosed properties across the county into affordable housing for families.

“Government can’t do everything,” Ms. Preckwinkle said. “We count on non-profit organizations like CCH to provide a safety net and knit together the services that government can’t provide.”

“It’s a program we like a lot,” Mr. Grisham said. “But it has been a difficult program to get off the ground. If it wasn’t for the Collation, we wouldn’t have gotten this far.” 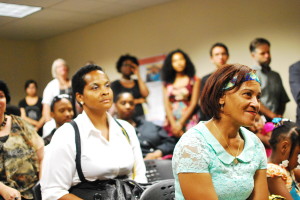 CCH Associate Director of Policy Eithne McMenamin praised the staffers who work for Mr. Mooney and Mr. Grisham, saying they have been very open and willing to collaborate on efforts to improve affordable housing.

Mr. Mooney said more resources and money needs to be devoted to helping those who are hurting.

“We are working hard to spread the TIF Purchase Rehab Program to other parts of the city,” he said. “It has been a privilege to work with [CCH], even in the hard times.”