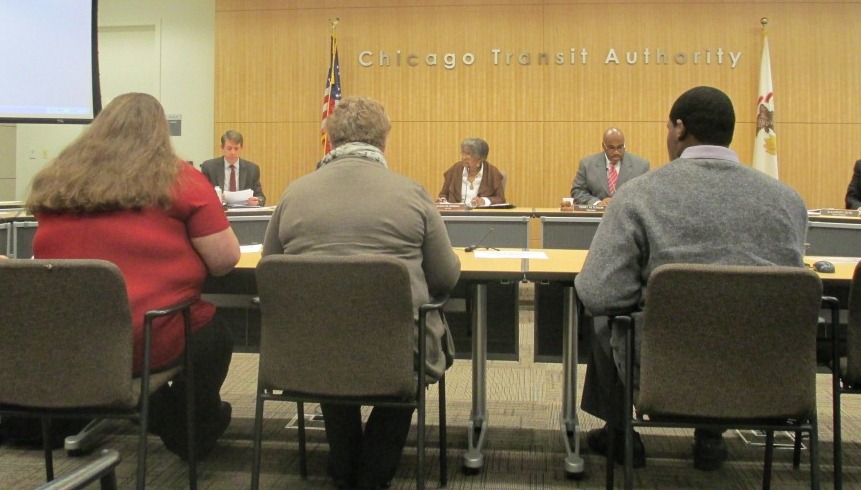 More than 30 homeless youth, youth service providers, and CCH staff asked the CTA Board on Friday to create a “Youth Connect Pass.” The proposed 30-day pass would be sold at a reduced rate to providers that would issue them to homeless youth clients who need a pass to get to work or school.

Eight homeless youth providers buy a variety of CTA passes for their clients, including 55 30-day passes and 158 weekly passes, according to a survey by the CCH Youth Committee. That quantity would cost providers $9,924 a month, under the new CTA rates that take effect Monday.

But providers active with the CCH Youth Committee say they are unable to meet the needs of many more youth who are trying to get to school or jobs: With a reduced fare pass of $34, providers could buy monthly passes for 275 clients who need them, while still spending almost the same amount with the CTA.

Two recently homeless youths told CTA Board members about their own experiences. Crystal Sahler was 17 when she became homeless after the sudden death of her mother. She lived on the street and was in and out of youth programs for four years before finding permanent housing.

“It is really hard for homeless youth to get bus cards to try to get around,” said Crystal, now 23. “Service providers try to meet this need, but ultimately cannot serve everybody.”

Jesse Moore told of being injured in a violent crime, which later required him to attend many physical therapy and doctor appointments. Without access to a 30-day pass, he was frequently unable to keep his medical appointments, delaying his recovery. Jesse said the lack of consistent access to CTA transportation also slowed his search for a job.

CTA President Forrest Claypool raised concerns that fare discounts may only be given in certain categories. But after listening to the testimony, four of the seven CTA Board members expressed some support. They included Kevin Irvine and John Bouman, president of the Shriver Center, who said that a youth pass would be “very close to the core mission of the CTA.”

Board Chairman Terry Peterson said he wants the CTA to address the issue, noting, “We’ve got kids caught in the middle of policy and there’s got to be a way to work through this.”

Board Co-Chair Jacquelyne Grimshaw drew applause from the crowd as she agreed, “We can also work on changing policy, too.”