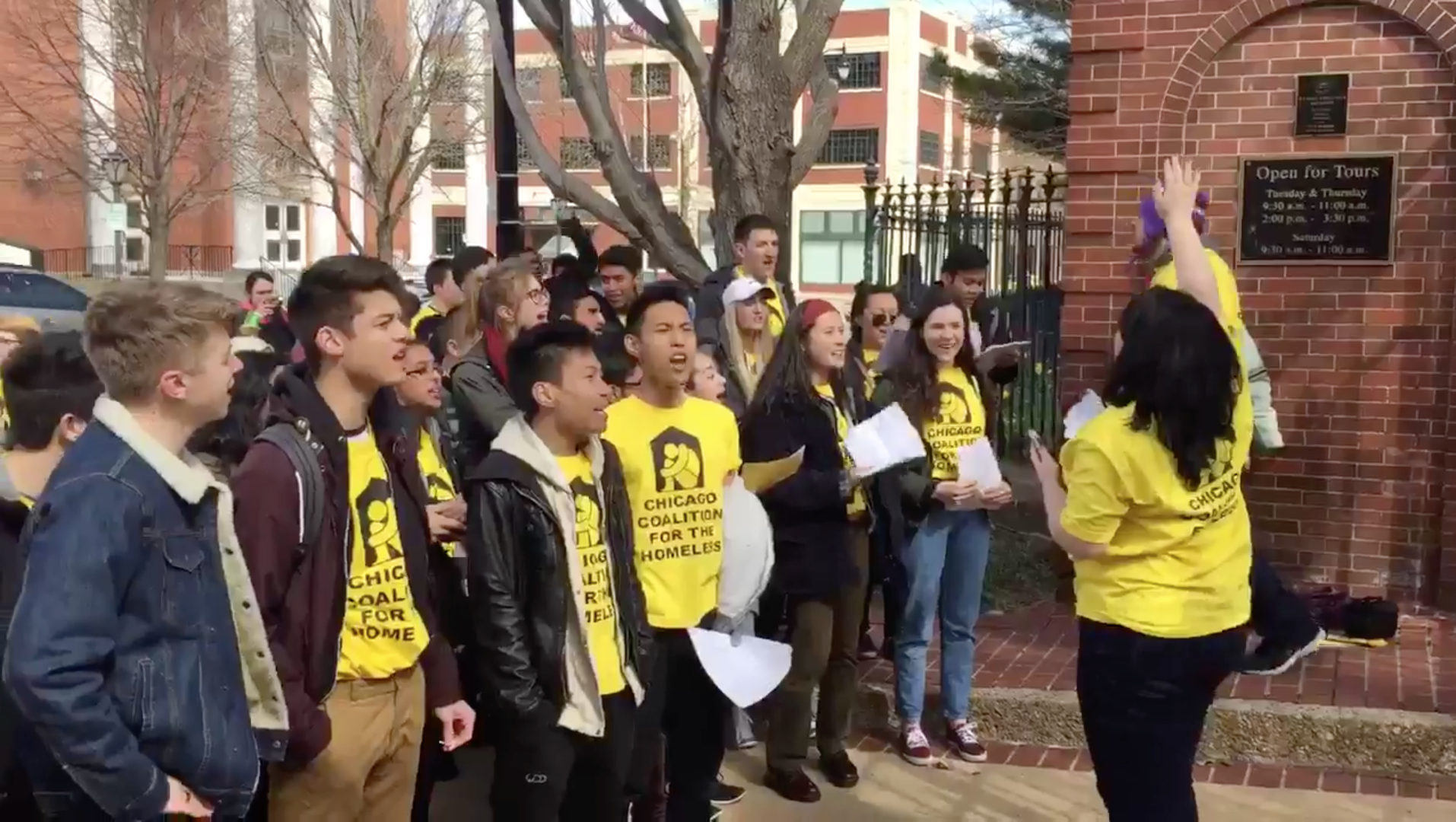 As the budget crisis ravages social services across the state, the Chicago Coalition for the Homeless traveled to Springfield April 5 with more than 100 homeless youths, Niles Township high school students, and service providers.

The group protested both inside and outside the Executive Mansion to bring attention to their message: “Governor Rauner needs to support legislation that would immediately release funding to ensure homeless youth have a place to lay their heads at night.”

Homeless youth met with the governor himself in February. They recounted the circumstances that lead to their homelessness, how they connected with their service providers, and where they would be without this assistance. The governor listened, promising that he would consider supporting HB4955/SB2603, legislation that would immediately appropriate funding for homeless services in Illinois.

But several days later, the governor’s staff informed CCH, youth, and providers that Gov. Rauner would not support the legislation. His office did not provide a reason. A week later, our youth leaders conducted a sleep-in at the Thompson Center — but again, got no response from the governor or his staff.

Determined to hear directly from Gov. Rauner, youth and providers decided to go to the governor’s Executive Mansion to ask him again.

With high school students chanting outside, a group of homeless youth initiated a sit-in at the Executive Mansion, demanding the governor explain his reasoning. After chanting for 30 minutes, staff members from the governor and First Lady Diana Rauner’s offices met with youth, providers and CCH staff. They promised to take the youths’ concerns back to the governor and Mrs. Rauner.

“I traveled hundreds of miles to ask the governor why he thinks my future’s not worth investing in,” said Kevin Flint, 23. “I want to move out on my own and become independent, but the governor is harming the program that can help me do that.”

Kevin spent 18 months in an adult prison for failing to register an address with parole officers for crimes committed 10 years prior, as a juvenile. After release, he was homeless but ready to change his life. He found Neon Street Dorms, a state-funded homeless youth program.

During the last six months, Kevin’s mother died and he was diagnosed with a serious heart condition which required surgery. Despite these difficulties, Neon Street supported him in finding full-time employment, going back to school and saving for an apartment.

But Neon Street has not received state funds since June 2015. As the budget crisis continues and without state funding, Neon Street will not be able to continue providing services to youth like Kevin as they work to better themselves and become productive members of society.

Though the youth would like to be optimistic, they have already sat down with the governor and his staff. They promise to remain vocal about the need for the governor to support the passage of HB4955/SB2603.