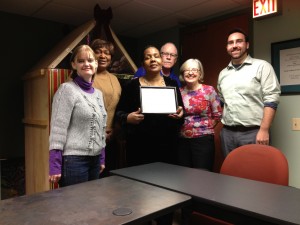 CCH staff met Thursday with State Rep. Esther Golar (D-Chicago), honoring the Chicago legislator for her support on a variety of issues that affect homeless students, youth and families.

That included Rep. Golar’s votes to drop a 52% cutback in state funding of emergency shelters and transitional housing across Illinois. It was the second time, within six months, that CCH helped reverse a proposed $4.7 million state cutback to shelters.

Rep. Golar said she cares deeply about the poverty issues that affect so many people, particularly youth. She has served seven years in the 6th District, which includes the struggling Englewood neighborhood.