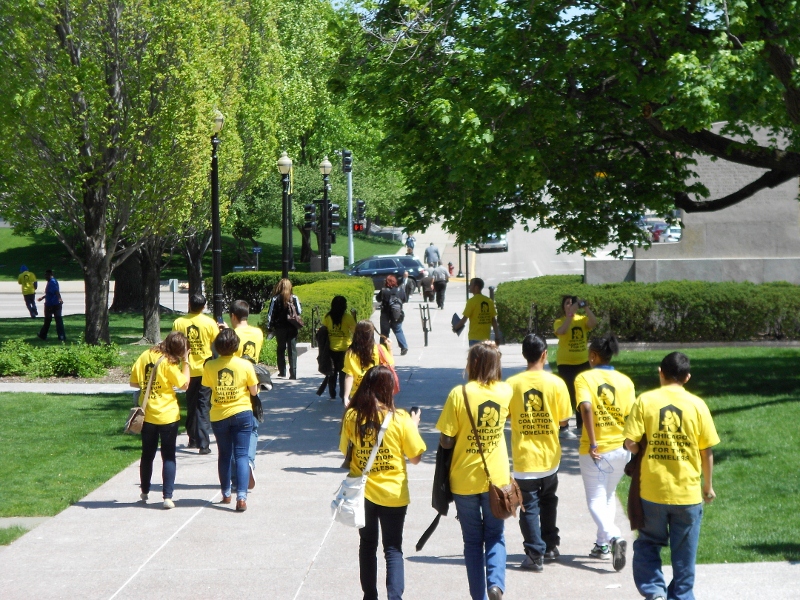 Organizers with the Chicago Coalition for the Homeless  brought 135 people to Springfield to advocate Wednesday. Making the trip were homeless people from Aurora and Elgin, two Chicago shelters, San Jose Obrero and It Takes a Village, and students from Tilden High School, Loyola University, and Trinity Christian College in Palos Heights.

We spoke with more than 20 legislators. We told them that we wanted their support in stopping proposed cuts to funding for emergency shelters and transitional housing, which are facing a cutback of 52%, or $4.7  million in July. We also advocated that homeless prevention grants to families have funding restored, from $1.5 million to $5 million.

It was a very exciting day marked with success.  Many legislators said they supported stopping the cuts to homeless services and it was clear that CCH is making an impact in Springfield. Our presence was easily felt in the Capitol Building — it’s hard to miss that many people wearing our bright yellow shirts!

Not only was there a great turnout in numbers, but it is powerful to have our community leaders tell their stories to  their elected officials. The next time the budget for homeless services is being considered, the stories and faces of our leaders will be the first things that come to the legislators’ minds.

Many of those who went to Springfield for the first-time found it inspiring. Said Carly Ferdman, a Loyola senior, “It had never really connected for me that our elected officials would allow or even want me to tell them how I feel. I’ve voted before, but now I appreciate democracy for the first time.”

“I felt the voices of real people were actually being heard,” said Lisette Lucero, a Trinity Christian senior.

CCH is very encouraged by the success of this experience in Springfield.