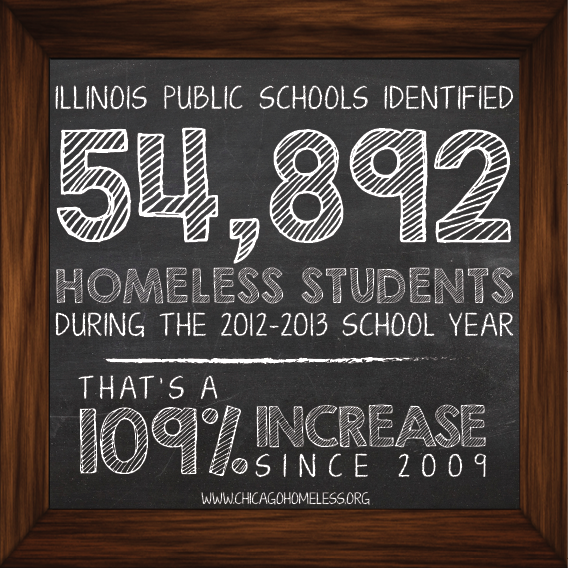 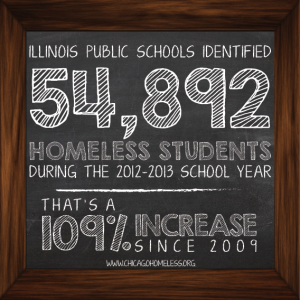 CCH has released findings from a statewide survey of public school districts: More than half of homeless students in Illinois must cope without needed tutoring, preschool or school counseling.

After months of advocacy by CCH, the Illinois State Board of Education and Gov. Quinn proposed to restore $3 million in state grants to fund school services for homeless students. It awaits approval in the FY15 state budget adopted in May by state legislators.

Illinois allocated $3 million for homeless school services for one year, during FY09, but funding was dropped the next year. Homeless enrollment in schools across Illinois has more than doubled over the past five years, to 54,892 last school year, in 2012-13.

Law Project Director Laurene Heybach and the homeless liaison for Kane County schools, Deb Dempsey, recently talked about the findings on WBEZ (91.5 FM) “Afternoon Shift.”  A recording of the interview is available here.

WBEZ also interviewed a college student about his experience with homelessness while growing up in suburban Kane County.

CCH ran a statewide survey in December 2013 that asked public school districts and Regional Offices of Education to respond about the level of services reaching children and teens identified as homeless students. Sixty-seven percent responded – 36 of 54 sub-grantees under the federal McKinney-Vento Homeless Assistance Act.

· 52% responded that more than half of their homeless students do not receive needed tutoring or access to preschool.

· 56% said that less than half of homeless students received counseling