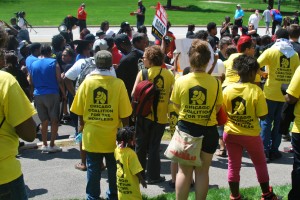 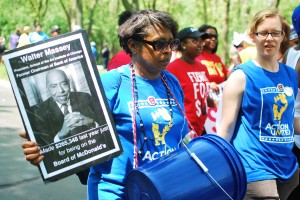 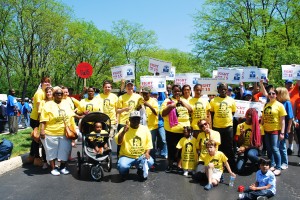 Interviews and photos by Shruti Sharma

More than 2,000 McDonald’s workers and activitists joined a Fight for 15 protest Wednesday outside McDonald’s world headquarters in suburban Oak Brook – among them, 101 community leaders from the Chicago Coalition for the Homeless.

Rachel Ramirez, a CCH community organizer, was among 100 McDonald’s workers and 38 activists and union leaders arrested in the protest. The protests garnered heavy local and national media coverage, including this report in USA Today.

“Just look at the McDonald’s headquarters. It’s so nice and so huge, yet their workers can barely survive off of these wages. You can just see the inequality right here,” said Alyce Bauer, 20, a DePaul University sophomore working with CCH.

The international Fight for 15 campaign seeks a livable wage of $15 an hour, as well as the right for fast-food workers to unionize without retaliation. The Illinois minimum wage has stalled at $8.25 an hour, having last been raised in July 2010, almost four years ago.

Cahirah Richmond, 39, is a medical assistant who also earns low wages and is currently homeless. The mother of three was proud to join a protest of unacceptably low wages.

“If the wages are too low, you can’t get back out there and pay rent,” she added.