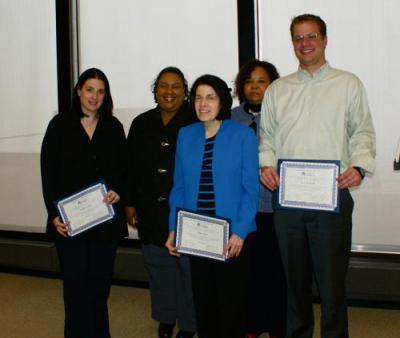 Thirty-eight volunteers from JPMorgan Chase Bank joined CCH this week to honor some of their top volunteers and make plans for upcoming outreach in Chicago’s Austin neighborhood.

Through the project, “Every Child in School, Every Day,” Chase and CCH run community outreach to tell Austin families about the educational rights of homeless children and teens. Their work has been funded by a generous grant from Chase Bank Foundation. Since 2009, Chase and CCH have distributed thousands of brochures and posters to commuters and at homes, stores and community centers during summer back-to-school outreach.

“People were very receptive to us when we stopped to give them the pamphlets,” said Ophelia McGee, a Chase employee who began volunteering last year.

“I went back and told everybody how wonderful it was,” said Chase’s Ella Eison, who volunteered last August. “People on the street were very accepting of our information. They’d say things like, ‘Oh, I know someone this would help.’”

Upcoming plans include a street outreach day on May 26 to explain school fee waivers. Materials will be distributed to explain that homeless and low-income students cannot be required to pay fees for field trips or graduation.

Co-chairs Donna Jackson and Sharlita Davis, both from the bank’s IP & Technology Law Group, organize the Chase volunteers. Ms. Davis is also a member of the CCH Board of Directors.