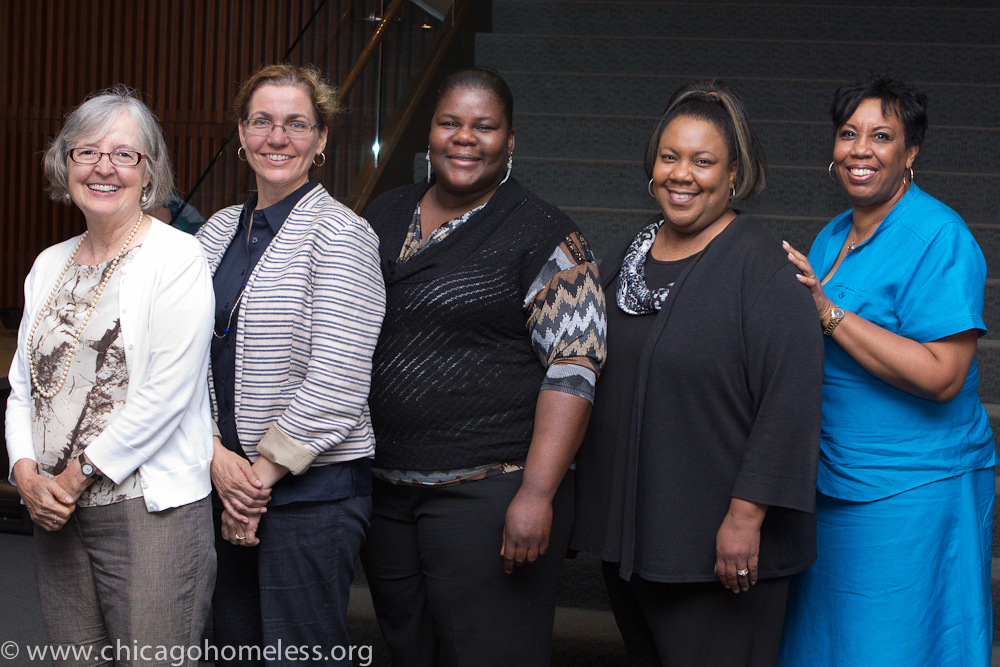 Longtime volunteers and some newcomers who work at JPMorgan Chase Bank gathered June 24 to kick off the sixth year of Every Child In School, Every Day, a collaborative volunteer effort between the bank and the Chicago Coalition for the Homeless (CCH).

The kick-off luncheon drew 27 bank volunteers and CCH legal staff who talked about the plans for school outreach in the coming year that is generously funded by JPMorgan Chase Foundation and supported by bank volunteers.

“Our volunteers are dedicated to helping people,” said Sharlita Davis, a CCH board member and Chase’s project chair for the campaign. “Chase volunteers recognize that not only do they have a corporate responsibility to assist our community, but they also have a heartfelt dedication to helping those in need.” 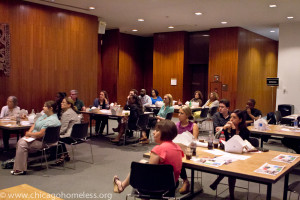 Ms. Davis, assistant vice president and contract officer in the IP & Technology Law Group, said that her work with the program since its inception six years ago has been “joyous.”

“We have helped so many families,” Ms. Davis told the volunteers gathered at the luncheon. “With this project you see how it is helping individuals and families.”

Chase Executive Assistant Lela Cetoute has volunteered with the program since the beginning, in 2009. She said that lending a hand not only helps those who are homeless, but also works to strengthen neighborhoods and the city as a whole.

“We don’t know what life is going to bring us, but we can give to someone else,” Ms. Cetoute said. “If you help a homeless child, you are planting a good seed.”

Plans for the 2014-15 school year campaign include citywide distribution of 25,000 informational brochures about educational rights, which will target youth enrolled in school as well as those who are currently not attending school. Additionally, CCH legal staff and volunteers from Chase will conduct 20 school-based legal clinics at 10 Chicago Public high schools, in low-income neighborhoods mostly on the South and West sides.

CCH staff and Chase legal volunteers will also help homeless and low-income students with some of the educational barriers they face. Those barriers include the right to enroll in school without delay and fully participate in school activities, as well as the right to school fee waivers for graduation or other in-school activities.

During the last year, $5,600 in fees were waived for 41 students. Chase paralegal Helen Lines helped at the walk-in legal clinics last year, and has volunteered for the last four years.

“I like working with the kids,” said Ms. Lines. “You feel like you are really making a difference and planting that ‘good seed’ that Lela mentioned.”

Tiphanie Morris, a senior administrative sssistant for Chase, said that her volunteer work has taught her about the educational rights of homeless and low-income students.

“Volunteering has definitely been educational for me,” said Ms. Morris. “The things that I have learned, I have been telling other people so more and more people can know what to do when they are faced with a situation.”

Chase paralegal Erin Julseth agreed, and said that volunteering during the outreach days is a lot of fun – even in the pouring rain.

“I feel like we are doing something to get the information out there,” she said. “When we go door-to-door during the outreach, we were putting the information right where people are going to see it.”

Attendees also heard from Marilyn Escoe, a mother of four whose family lived in a shelter for two years until securing an apartment earlier this year. She spoke of how difficult it was to make sure her children got a good education while living in a shelter far from their school, and how the CCH Law Project helped her secure transportation to and from school. Her oldest daughter, Kaleyah, just graduated as the 8th grade salutatorian at her school, and Ms. Escoe is finishing studies at Le Cordon Bleu.

“Just because you are homeless doesn’t mean you can’t get a good education,” Ms. Escoe said.

This year the luncheon honored Michael Lipsitz, General Counsel for Consumer and Business Banking, and chairman of the Chase National Pro Bono Committee. Mr. Lipsitz was out of town and unable to attend the lunch, but his support has been instrumental to the success of the program, said Ms. Davis.

“Michael has been very supportive of the project, and the Chase pro bono efforts overall,” she said.

One of last year’s award recipients, retired Chase attorney Dale Granchalek, said he has enjoyed working on the project for the last six years.

“It is rewarding to see that you can help someone a whole lot with just a little bit of effort on your part,” he said.