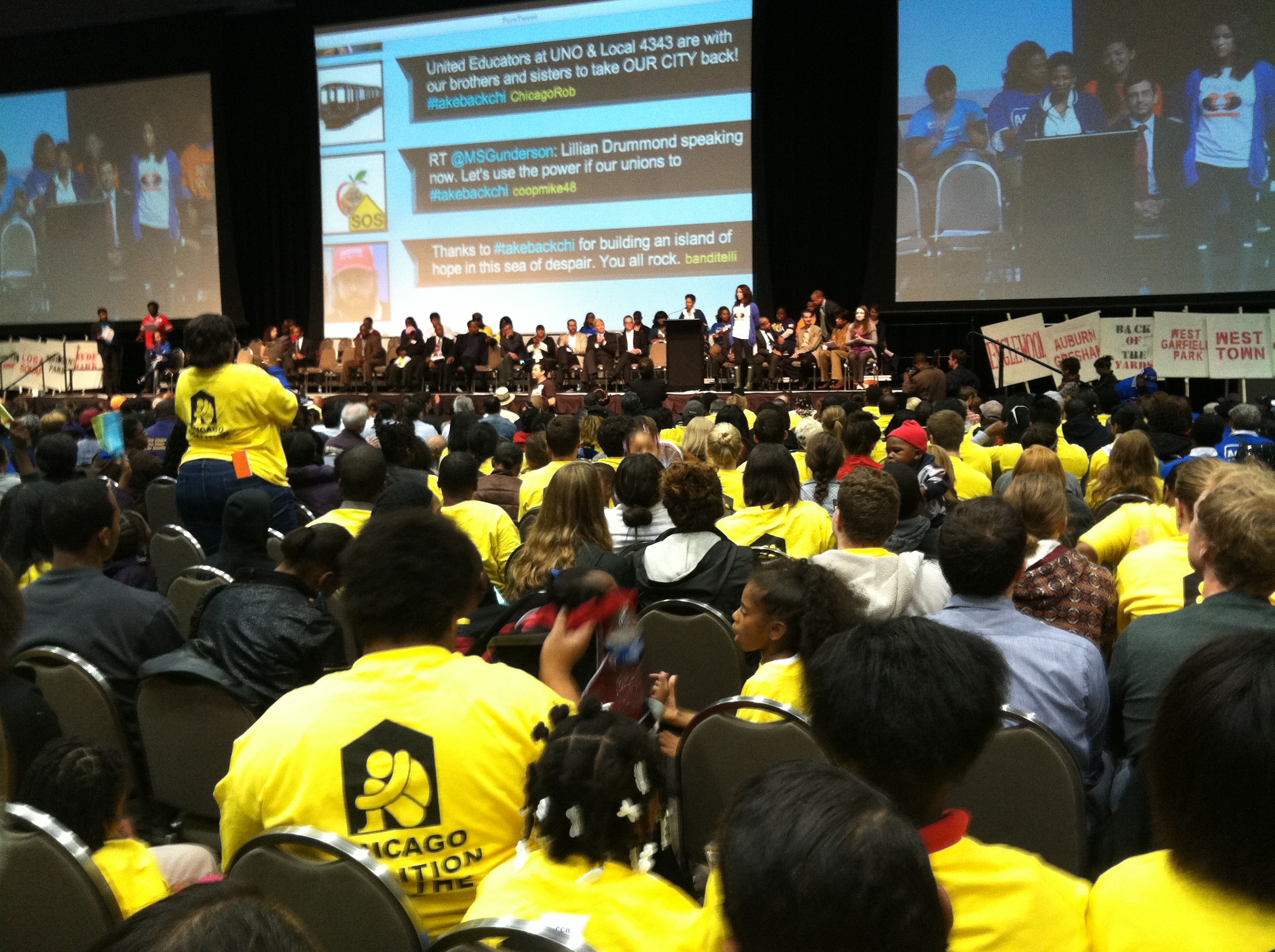 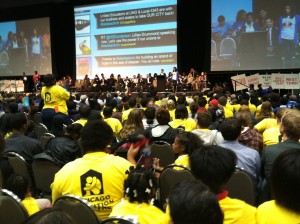 More than 1,300 people and 35 community and labor organizations mobilized to “Take Back Chicago” during a Tuesday night rally on the University of Illinois-Chicago campus.

Walking into the UIC Forum, participants were excited by the crowd of people in yellow, blue, red and purple T-shirts, and large signs listing off the many city neighborhoods represented in the room.

CCH organizers brought 201 people to the event, including more than 130 residents of shelters across Chicago. The CCH group included 44 college and high school students who work with the CCH Speakers Bureau, students from Chicago’s Mather and Curie high schools and DePaul, Loyola and University of Chicago.

We asked some CCH leaders why they turned out for the Tuesday evening rally.

“I’m homeless, with no place to live. I’m in the throes of homelessness, and I’m here to learn what we can do,” said Denise Tervin, a shelter resident from Humboldt Park.

“I went out tonight because a flat (state income) tax is unfair, but it can be changed,” said Lou Campbell of Breakthrough Ministries.

“In a just society it is important for people to come together,” said Charles Jenkins, a veteran CCH leader who lives on the West Side with his family. “I came today to be a voice.”

Voices from Chicago’s neighborhoods were heard loud and clear, as community members asked three state legislators and 11 Chicago aldermen whether they would support raising the minimum wage, creating more affordable housing and social services, more funds for Chicago Public Schools, an elected Chicago school board, and a progressive state income tax. Every public official spoke up in support of the proposed agenda.

Gov. Pat Quinn, who arrived late to the rally, also spoke in favor of raising the minimum wage and the efforts of community organizing groups like the Grassroots Collaborative, which mobilized Take Back Chicago.

CCH’s Charles Austin was among community members telling their stories to the crowd. Pastor Austin spoke of experiencing homelessness again this summer when he lost his job and his wife’s work hours were cut.

“We must increase affordable housing, reduce crime and recidivism, and bring hope to the hopeless,” Pastor Austin said.

An audience favorite was Asean Johnson, a 10-year-old boy who spoke out during recent CPS school closure hearings.

“These are our streets!” said Asean. “This is our city.”