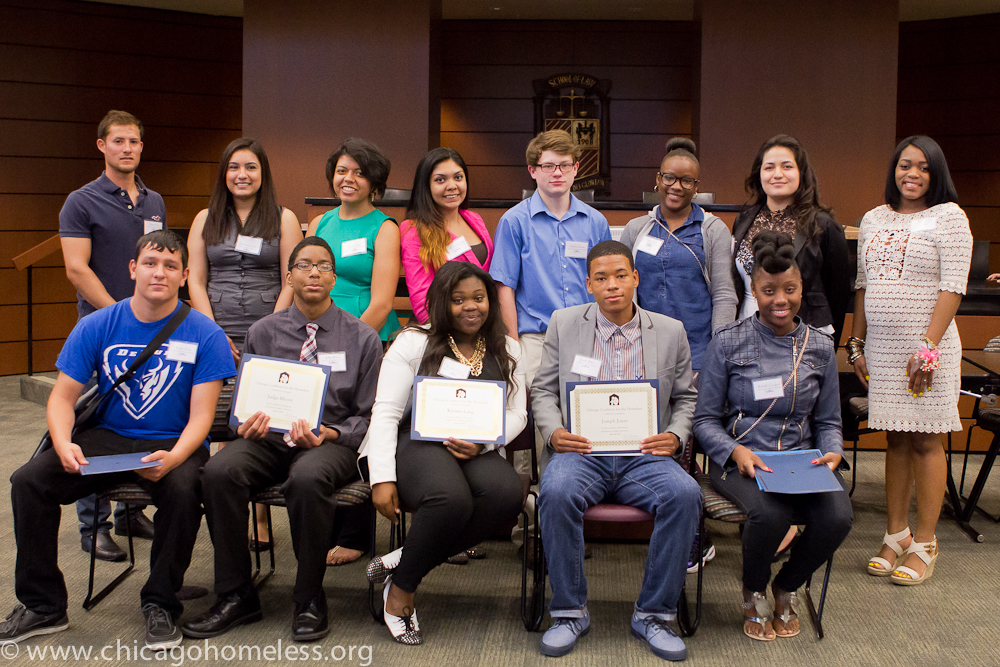 Nasia Smith, our 2014 graduate from the University of Arkansas at Little Rock, was featured speaker at the June 26 ceremony, hosted by Loyola University Law School.

Also honored were nine sophomores and juniors who will receive $2,000 renewal awards, as well as two seniors who graduate this fall with help from pro-rated awards. They attend Concordia, DePaul and DePauw universities, Lake Forest College, Olive-Harvey City College, the University of Illinois-Chicago (UIC) and the University of Illinois-Springfield.

The college scholarship program is funded by private donors and by grants from the Osa Foundation, Sisters of Charity, BVM and the North-Shore based Student Alliance for Homeless Youth. Thanks to a generous incentive created by the Osa Foundation, 2013 winner Jessica Lee will receive a new laptop for maintaining above a “B” average in her freshman year at UIC – the ninth scholarship student over five years to earn the Osa award.

During the event, CCH also honored the Dubuque-based Sisters of Charity, BVM, and Rose Mary Meyer, BVM, the director of Project IRENE, for their generous support.

Mahalia Crawford: Mahalia graduated with a weighted grade point average (GPA) of 4.0 from Kelly High School in the Brighton Park neighborhood. She was active in the school choir, Mikva Challenge, Voices of Youth in Chicago Education, Alliance for Educational Justice, and the South-West Organizing Project (SWOP). Mahalia plans to major in health administration at Tougaloo College, an historically black college in Mississippi. She also won a renewable scholarship as a United Negro College Fund (UNCF) Scholar selected by the Chicago Public Schools.

Joseph Jones: Joseph was ranked 4th in his class at Englewood’s Harper High School, with a 3.62 weighted GPA. Active in the school leadership program EMBARC, Joseph was a featured speaker at Chicago Ideas Week last fall, and he interns with the program this summer He plans to major in business and cultural speech at Western Illinois University.

Kristen Lang: Kristen was involved in many extracurricular activities at Percy Julian High School in the Washington Heights neighborhood. Through a work-study internship at the Northern Trust, Kristen decided to study to become a certified public accountant. With a weighted GPA of 3.5, Kristen also won college aid to attend Benedict College, an historically black liberal arts college in Columbia, South Carolina.

Judge Moore: Judge was active throughout high school on the Chicago Knights robotics team, after spending his middle school years on the First LEGO League robotics team. Judge plans to study computer engineering at the University of Illinois-Chicago. At Lincoln Park High School, Judge earned a weighted GPA of 4.0.

Square neighborhood. He competed on the football and swim teams, and was involved in the art and film clubs, Junior ROTC, and Mercy for Animals. To help support himself, Joseph earned money drawing portraits at Lincoln Park Zoo. With further help from a university scholarship, Joseph plans to major in health sciences at DePaul University. Joseph has been selected by Bottom Line Chicago, a new college success program offering one-on-one mentoring throughout college.

Nasia Smith first worked with CCH as a client of the youth attorney while in high school, when she was homeless and supporting herself and her infant son. Beginning her college studies at Philander Smith College in Little Rock, Ark., Nasia attended college while working almost full-time in retail to support herself and her son, now 6 years old. She later transferred to the University of Arkansas at Little Rock, where she completed her bachelor’s degree in business. During college, Nasia was selected three times to attend or be a youth panelist at the Clinton Global Initiative’s national youth conference. Engaged to be married, Nasia and her son now live in Dallas, Texas, where she manages a clothing store.

“I am in no position to give advice,” Nasia told the scholarship students, “because my experiences have been different than each of your experiences.  We all learn in different ways, have diverse interests, and reach for the goals of our own heart’s desires. However, we all gain life experience: one mistake, one success, one memory at a time. Collectively we have not just an education in school, but in life. The piece of paper that I received is merely a stamp of approval for learning what is required, but what is more important is what we require of ourselves.”

A 2010 winner, Sean Hopkins, also graduated this spring. An education major at Knox College, he will teach language arts at a Roseland neighborhood charter school.

By fall 2014, 11 scholarship recipients graduated with bachelor’s degrees, and another from a nursing program, a 40% completion rate.

The awards event was held at Loyola University Law School, 25 E. Pearson St., in the 10th floor ceremonial courtroom. A reception at 5:30 p.m. was followed by the hour-long awards event at 6 p.m.