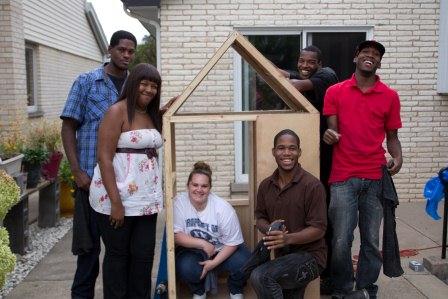 Check out our new website about Chicago’s One-SQM-House project: www.onesqmhouseus.com

Under the direction of the Chicago Coalition for the Homeless (CCH) and a professional carpenter, a group of homeless youths have built the first One-Square-Meter-House – officially known as the One-SQM-House  – in the United States.

The first One-SQM-House made its public debut in mid-September, during the Riot Fest music festival in Humboldt Park. CCH was a partial beneficiary and had a tent staffed throughout the festival.

Six homeless youth and professional carpenter Matt Crowther volunteered their time on Saturday, Sept. 8 to build the first One-SQM-House in the U.S. CCH plans to build several Houses to display throughout the Chicago area beginning in November, during National Runaway Prevention Month. 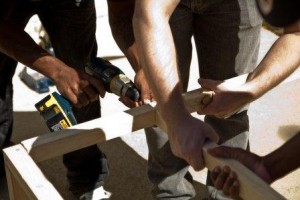 housing, and the needs of homeless youth – something the attorney experienced himself as a young man.

Six youth from Harmony Village, Open Door Youth Shelter and the HELLO youth group helped build the house, using a new design by German architect Van Bo Le-Mentzel of Berlin. Van Bo talked via Skype with the youth as they were wrapping up their work late last Saturday afternoon.

“Van Bo was immediately supportive of CCH building the first U.S. One-SQM-House,” said Hopkins. “He was especially enthused that CCH was going to recruit homeless youth to build it.”

Erica Schoeben, 18, said it was her first time using a power drill. That wasn’t the case for another volunteer, Wendell Roby. The 20-year-old earned a carpentry certification in the Jobs Corps, though his current job is at a grocery store.

Wendell said he likes the meaning of the One-SQM-House: “Everyone’s entitled to their own space.”

“I just hope people pay attention to it and get the meaning of it,” said Andrew Jones, 20, who earned Jobs Corps certification as a logistics technician. “Everybody should have their own space and privacy and independence.” 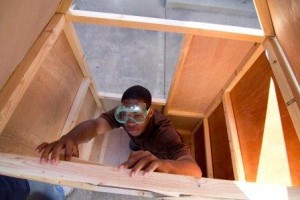 The Berlin-based architect who designed the One-SQM-House was a toddler when his family fled Laos for Germany. Le-Mentzel dedicates his career to examining the meaning of home and the importance of having at least one square meter of personal space.

Hopkins has been in regular contact with Le-Mentzel since July, working with him to adapt his designs so that standard U.S. construction materials are used and the cost is close to the $300 goal that Le-Mentzel has set. The House has captured the imagination of people throughout Europe  – Le-Mentzel has received widespread media attention for both his design of the House and his campaign to urge people to consider what and how much they really need.

For more about One-SQM-House and its designer, click here.