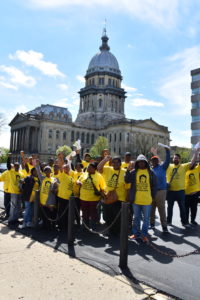 During this successful legislative session CCH’s policy and organizing departments, along with our leaders, worked on various initiatives to remove barriers for people experiencing homelessness.

CCH advocated for House Bill 3129 with Heartland Alliance and the Sargent Shriver National Center on Poverty Law to eliminate the Temporary Assistance for Needy Families (TANF) full family sanction. The cash grant is meant to provide families living in extreme poverty assistance in meeting their basic needs but sanctions can further push families into poverty and lead to children experiencing homelessness, ER visits, and food insecurity.  In providing that 75% of the grant belongs to the children, sanctions can now only be levied against the parental portion. The bill passed both houses of the General Assembly on May 17, and is awaiting signature by the governor. Fact sheet available here.

We also worked Heartland and the Shriver Center to pass the Prepared Meals for Supplemental Nutrition Assistance Program (SNAP) recipients (House Bill 3343).  This legislation will allow people who are elderly, experiencing homelessness,  or have a disability to purchase prepared meals with their SNAP benefits.  Many either do not have access to a kitchen or are unable to use their kitchen safely. This bill will permit these populations to go to restaurants and grocery stores with hot bars to purchase meals at concession pricing. The bill passed both houses of the General Assembly on May 17, and is awaiting signature by the governor. Fact sheet available here.

Under the College Hunger Expansion, Senate Bill 1641, students will be notified of preliminary SNAP eligibility by their college/university, based on their Monetary Award Program (MAP) grant eligibility. Students will still be required to fill out and apply for SNAP with the Illinois Department of Human Services (DHS).  They must also comply with SNAP requirements mandated by the Federal government in order to qualify for benefits. The bill passed both houses of the General Assembly on May 31, and is awaiting signature by the governor. Fact sheet available here.

In organizing Continuums of Care around the state, House Bill 3331 clarified providers’ ability to assist people who may need support with arrearages and short-term housing assistance going forward and permits more comprehensive case management through this 20-year-old program. The bill passed both houses of the General Assembly on May 22, and is awaiting signature by the governor. Fact sheet available here.

In working to ensure youth leaving systems of care are stable, House Bill 2983, Launching Youth Into Stability, will charge departments to come to the table to determine the number of youth leaving systems of care who enter into homelessness and find better ways in which to serve them. The bill passed both houses of the General Assembly on May 17, and is awaiting signature by the governor. Fact sheet available here.

As a member of the Restoring Rights and Opportunities Coalition of Illinois (RROCI), CCH, Heartland Alliance, Cabrini Green Legal Aid, and Community Renewal Society, successfully advocated for the passage of Senate Bill 1780. This bill makes it a civil rights violation to discriminate during a real estate transaction based on an individual’s arrest record that did not lead to a conviction, a juvenile record, or a record that has been ordered sealed or expunged. The bill passed both houses of the General Assembly on May 31, and is awaiting signature by the governor.

Working with the Responsible Budget Coalition, CCH testified in support of SJRCA1.  This resolution will permit the inclusion of a question on the November 2020 ballot on whether Illinois should shift from a flat income tax to a graduated income tax.

Lastly, CCH worked to increase funding to the Homelessness Prevention Program with an additional $5 million, bringing the total to $9 million annually, as well as an additional $1 million in funding to homeless youth programs. The Homelessness Prevention Program saves the state thousands per household, ensuring families remain housed, but the budget has been decimated over the last decade. Advocacy by a group of providers, led by CCH, resulted in the more than two-fold increase.

CCH also worked along with its housing partners in advocating for the inclusion of funds in the state’s first capital bill in 10 years. The $200 million in funding for affordable housing has the potential to create 2,000 additional housing units across the state. This is also an increase from $145 million included in the 2009 capital bill.