Proposed Funding Mechanism Resonates With Voters, According to Poll, Would Shrink Homeless Population by Nearly 36,000 in 10 Years

With more than 80,000 Chicagoans grappling with homelessness – nearly a quarter of them children struggling to stay in school – a broad coalition of policy advocates, elected officials, and community groups embarked today on a campaign to combat the problem, introducing a proposal that the bulk of the city’s likely voters are prepared to support, public opinion research shows.

The Bring Chicago Home campaign will be announced at a 9:30 a.m. press conference today on the second floor of City Hall.

More than three-fourths of likely voters believe the city needs to redouble efforts to combat homelessness – and two-thirds favor a one-time tax on properties sold for $1 million or more to do it – according to a poll conducted for the Chicago Coalition for the Homeless (CCH). Those findings provide an impetus for a City Council measure being introduced October 31 that would seek voter permission to supplement funding for homelessness-relief by instilling a modicum of progressivity into city’s flat tax on real estate sales.

Under the funding formula, Chicago’s Real Estate Transfer Tax (RETT) would increase by 1.2 percentage points on properties sold for $1 million or more – a threshold that would not affect 95% of all property owners, based on the average volume of transactions recorded annually. The concept garnered support from 66% of respondents in an April 2018 poll of likely city voters, conducted for CCH by Anzalone Liszt Grove Research.

“Homelessness in Chicago is not an inevitability, but a reflection of where we, as a community, place our priorities,” said 27th Ward Ald. Walter Burnett, the chief sponsor of the legislation. “We can dramatically reduce homelessness if our policies match the resolve of our people. City residents overwhelmingly agree that we need to mount a more robust attack on homelessness, and our proposal would translate that call into action.”

The proposal is forecasted to help nearly 36,000 people escape the hardships of homelessness over its first decade, fueled by $150 million in new revenue that would begin to compensate for the minimal funds the city currently spends on homelessness programs. The revenue generated from the tax increase would be legally dedicated to those programs, precluding any future designs on diverting the resources for other uses.

Funding will be used for rental subsidies, capital to preserve and construct affordable housing, as well as support services that ensure housing stability.

“This proposal is affordable, responsible, and popular,” said CCH Executive Director Doug Schenkelberg. “It’s affordable, because it targets only 5% of the most affluent properties in city.  It’s responsible, because it legally pledges the money to combatting homelessness. And it’s popular, according to the two-thirds of likely voters who expressed support for the idea. As a city, we simply need to act. The solution is within our reach.”

Chicago’s existing $15.5 million allocation to homelessness-relief represents a small fraction of what other major cities commit to the same effort. Indeed, that figure appears even more scant when compared to the number of Chicagoan’s experiencing homelessness. On that basis Chicago spends $732.55 per person experiencing homelessness, a ratio that nine other cities – many of them less than half of Chicago’s size – exceed by exponential margins. 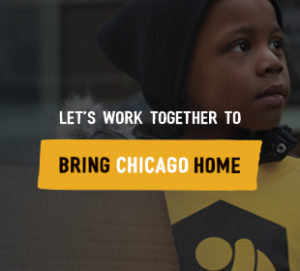 This shortage of resources has perpetuated the city’s homelessness problem, which afflicts almost 18,000 children enrolled in Chicago Public Schools and more than 35,000 members of families struggling to achieve stability without a permanent place to live. Meanwhile, military veterans and women fleeing domestic violence are also at higher risk of succumbing to homelessness, research shows.

Homelessness in Chicago manifests in ways both starkly visible on the streets, but also lurking behind closed doors, as overnight shelters brim with occupants and 64,114 people live in “doubled-up” conditions where families bunch together under one roof, because they can’t afford housing of their own, according to CCH estimates.

Under Illinois law, Chicago voters must approve any amendments to the Real Estate Transfer Tax by a ballot referendum, which, in turn, must be authorized by a resolution adopted by the City Council. If a simple majority of voters approve the referendum question, the City Council must then adopt a corresponding ordinance to institute the proposal into law.

Wednesday’s City Council action initiates this three-step process, and supporters hope to submit the resolution for a vote by the full City Council in November, qualifying the referendum question for inclusion on the February 2019 ballot.

Only 5.2% of Chicago’s average annual real estate sales would be subject to the tax, including only 3.6% of residential purchases. The tax increase would be assessed on the buyer of the property.

FOR MORE INFORMATION GO TO http://www.bringchicagohome.org