Victor Reed and his children spent nine months at a West Side shelter before moving into an apartment this summer.

It’s an experience that inspires his community spirit. While his family has their own home again, Victor volunteers with the Chicago Coalition for the Homeless and its new housing campaign, Bring Chicago Home.

“There are people behind me, people who are low on hope and don’t have resources,” says Victor. “I let my children be aware of the situations other people face and that homeless does not mean hopeless.” 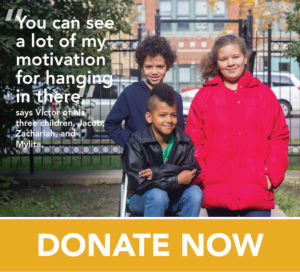 Victor copes with tough circumstances, raising three children on his own. His ex-wife, an addict, abandoned the family when their children were ages 6, 2, and 4 months old. After many years working for People’s Gas or Northwestern Memorial Hospital, Victor had to quit to tend to his young children.

Money was tight, but the Reed family always got by. Their housing crisis was triggered after the family found out they were living below a drug dealer, with people coming and going from the apartment building. Before Victor could find another low-rent apartment, police raided the upstairs unit – and the Reeds faced overnight homelessness.

“My children were on the street about 2 in the morning. The police took us to 10 South Kedzie (a 24-hour homeless center). About six hours later, they found us a spot at SRHAC.”

The Reeds spent last school year sharing a room with two bunk beds, on a family floor at the Single Room Housing Assistance Corporation in the Austin neighborhood.

“While I was there, I poked my nose in everything,” he says, smiling. Victor would pitch in at Chicago HOPES for Kids, where his children participated in after-school tutoring. He also helped out at the Austin Community Family Center.

Last fall, Victor met Keith Freeman, a CCH community organizer who runs outreach at 10 shelters across the city. Soon after, Victor and his children joined CCH on a budget advocacy trip to Springfield.

“The education has been good for my children, so they can see the story from both sides. I’m just trying to teach my children political science, trying to do things to grab my daughter’s interest before high school exams.”

Victor’s family moved into a subsidized apartment in June, helped by Catholic Charities. When his kids returned to school, he resumed looking for work. He also joined the Leaders Committee on Bring Chicago Home, a campaign to fund enough supportive housing to dramatically reduce the number of people who are homeless in Chicago.

Victor’s children love having a father who looks out for them and their community.

“Victor is faithful and knowledgeable about the campaign. He’s active, teaching his kids about social justice, economic justice, and what’s right and what’s wrong,” says Keith.

Life continues to improve for the Reeds. Victor recently found a seasonal job with Amazon. And while the needs of his children come first, that includes serving as a leader on Bring Chicago Home.

“I can’t do anything great, but I can do a lot of little things,” says Victor. “If I can give someone hope, I’d like to do it.”