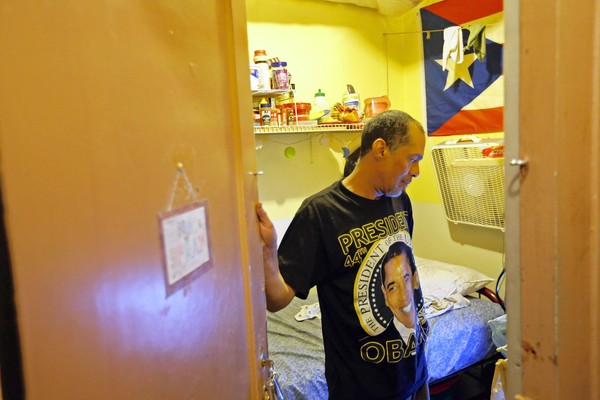 There is nothing luxurious about the Wilson Men’s Hotel in Uptown.

The 7-by-7 rooms are tiny and crowded, with only enough space for a twin bed, a dresser and maybe a shelving unit. The building is historic but worn, dark and drab, and much of the decor harks back to another era.

But for Agripino Lebron, the four-story hotel is home.

“It’s better than the shelter or under the bridge,” he said, showing off his tidy room where he has covered one wall with a Puerto Rican flag and built a shelf to hold his stock of nonperishable foods. He stores many of his clothes under his bed and shares a bathroom and kitchen.

“It’s the cheapest rent you can get. This place is mine,” said Lebron, 46, flashing a wide grin and gesturing to his chest with obvious pride.

The Wilson Men’s Hotel, one of only two cubicle-style housing facilities in the city that offer affordable housing aimed at low-income residents, is at risk of being shut. Proposed changes to the city’s zoning ordinance that are still pending in City Council would prohibit cubicle-style sleeping-room hotels in residential communities like Uptown.

The ordinance as drafted now makes exceptions to allow the dormitory-style sleeping stalls in places that accommodate travelers, like near O’Hare and Midway airports and even near McCormick Place. But neighborhoods would be barred from having them, a proposal that could also mean the closing of the Ewing House in the South Loop.

If approved, the ordinance, which was sponsored by Ald. James Cappleman, 46th, but is supported by several City Council members, would take effect in May.

But the legislation faces a steep hurdle — it doesn’t have the support of Mayor Rahm Emanuel. The mayor’s office has said in previous interviews that it would be a bad idea to close the hotels without alternative housing for the residents.

Still, concerned about any possibility of losing their home, residents of the Wilson Men’s Hotel have been staging a public battle to fight the proposed ordinance. They have taken to Facebook to round up supporters and passed out fliers in the neighborhood. They organized a protest outside Cappleman’s office and on neighborhood streets, holding signs and chanting slogans.

The men and hotel owner hope that by bringing a more public eye on their plight, they can also highlight the disappearance of affordable housing on the North Side. And for the first time, members of this normally hidden population have become visible to show how they live.

“Before this, very few people in Chicago even knew what a cubicle hotel was,” said Jay Bomberg, owner and manager of the Wilson Avenue facility. “But the act of the alderman has shed a light on who we are. People need to know that we really do fill a need in the community of housing. We’re a step above a shelter. The next step up is a (single room occupancy building).”

Local housing activists worry that the recent attempts to close the Wilson Hotel represent a push to rid the developing Uptown community of poor minorities. The ordinance banning cubicle hotels could affect one building in that neighborhood, but several housing complexes that serve the poor are struggling to stay functional for various reasons, said Mary Lynch-Dungy, an organizer with the Organization of the NorthEast.

Closing the hotel “will end up as further segregating this neighborhood,” she said. “These people would never be able to find housing here again.”

Although Cappleman’s ordinance would basically ban the Wilson hotel, he said his goal is to improve living conditions in the facilities. In a written statement, Cappleman said there are too many men to one bathroom at the Wilson hotel and he’d like to work with Bomberg to fix up the building.

“From the very beginning I have stated that I would never allow anyone living there to become homeless,” he said. “I’ve stated this time and time again.”

Cappleman said he is making plans to meet with Bomberg and his attorneys to draft a plan to improve the building. But Bomberg denies a friendly working relationship. Instead, Bomberg said the proposed ordinance sent 20 percent of his residents packing, and he’s struggling to maintain stability.

Bomberg thinks that as his lakefront community gentrifies and attracts newer developments, owners like him are being pushed out because they cater to the poor and needy.

“As an owner, this is a government taking of a business, and it’s a great concern. By prohibiting me from existing, I can no longer pay my mortgage,” he said.

The Wilson Men’s Hotel was established in the 1920s and first served a transient group of workers who came to Chicago to take on temporary jobs, usually in construction or at factories. But over time, as Chicago’s landscape and economy changed, so did the hotel’s demographics. Instead of serving workers, the hotel became home to the poor and troubled, Bomberg said and news records show.

Now, most of the residents at Wilson are low-income, older men who can’t afford better apartments and need a place where they can pay rent from week to week. There are now about 160 men who lease cubicles at the hotel for $80 a week, or about $320 a month. The average age of the men is 52, and half of the residents are African-American.

Many of them are retired and living off public aid, but some work low-wage jobs and see the hotel as a way to maintain some independence. The average resident has lived in the hotel for six years, Bomberg said.

The hotel looks like a run-down dormitory, with dark hardwood floors and a bleached, white bathroom on each floor. Each cubicle is its own unit, with four walls and a locked front door, but only a few have windows.

Bomberg came to own the hotel after buying and developing other real estate nearby, he said. An established real estate investor, Bomberg bought the hotel in 2007, hoping to eventually renovate it and upgrade the facility. But as the economy dived, he had to readjust his business plan, he said. Now he works full time managing the hotel.

The hotel is far from perfect. City records show it has been cited with having poor ventilation, chipping paint on the window shutters and even bedbugs.

But inside the building, each of the men has a different life journey that led him there.

Seadrick Potokovic, 36, said he lived for years with a roommate because that’s what he could afford. But when sharing apartments, he felt his space was always accessible to others. At the hotel, he could pay less, have a locked room and still share a kitchen and bathroom the way he did in apartments.

“It’s quiet, it’s cleaned daily,” he said one recent morning as he walked the narrow hallways visiting his friends on his floor. “Here it just feels more private. It’s really good for the price.”

When he first moved there, four years ago, he could save money because the rent was so cheap, Potokovic said. When he fell on tough times and wasn’t working, he could still afford to have his own place there.

“It’s really hard to find a cheap place to live, especially here,” he said, referring to the North Side.

For Edward Whetstone Jr., 34, the rooming house has been a godsend, he said. He was renting a room in Englewood but chose to leave after a break-in. Because he has a history of arrests and bad credit, Whetstone couldn’t qualify to live anywhere else, he said.

But at Wilson he has a small room where he keeps his bicycle, clothes and modest belongings. He watches movies in his downtime and works two part-time jobs to cover his rent. At Wilson, he doesn’t have to worry about paying for electricity or gas.

So when he heard about the ordinance, he took to the streets in protest. “This place is so good to me. So I’m going to fight,” he said.

When David Hoover first moved into the Wilson in 1976, the cost was $2 a night, he said. He was working as a day laborer and the price was perfect, he said. Over the years he stayed because that price remained right, he said.