Five years ago, April Harris and her family had to flee their hometown, Pittsburgh.

April’s family was targeted after she asked the housing authority to put a stop to early-morning drug dealing by her home. The family moved to a new neighborhood, doubling-up with friends, but when the threats continued, they were advised to move out of state.

“We went to the nearest police station. They took us to 10 South Kedzie,” said April, describing how her family was quickly placed in Chicago’s emergency shelter system.

That led to on-and-off stints in shelters over the next four years. 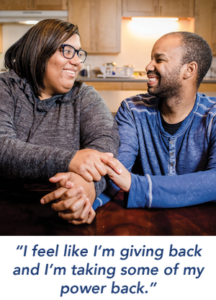 April and her husband, Greg, have chronic health issues, including Greg’s multiple sclerosis. They rely on Social Security disability income to support themselves and their two children. The family’s first six months in the Salvation Army’s Booth Lodge family shelter was followed by two years struggling to pay rent for unsubsidized apartments.

The family moved from their first apartment because Greg, who needs a walker, had difficulty using stairs. They became homeless again in fall 2017, after their basement-level apartment was deemed unsafe by a city inspector.

“We were placed at You Can Make It, a shelter on the South Side. That’s where we met Keith,” said April, referring to Keith Freeman, senior community organizer at the Chicago Coalition for the Homeless (CCH). “We got involved right away with Keith, going to actions, working on the Fight for $15.”

The family moved after four months to another shelter in the Austin neighborhood. April grew more active with CCH while searching online for housing. She felt some pressure, knowing frequent moves impacted her husband’s health and upset the children.

April’s daughter had tested into a magnet school, so she stayed in the same school. But the moves forced her son to transfer schools repeatedly in his early elementary years.

“He didn’t understand why we kept having to move. He was like, ‘Mom, I just want to be able to stay at the same school,’” she recalled.

After 11 months in shelters, the family secured a one-year placement in a subsidized apartment. The Harris family was grateful to be housed, but they still faced instability when the temporary placement ended.

“It’s kind of scary, because that year goes by fast, and you think, ‘How can we afford this when the subsidy is up?’”

April would track prospects for subsidized, accessible housing, signing waitlists and calling to check for openings. Those efforts helped her secure a long-term subsidized apartment last May, in a new Humboldt Park six-flat managed by LUCHA.

With her family’s home secured, April blossomed as a community leader with CCH. She joined its Speakers Bureau, works part-time in the CCH office, and serves as a grassroots leader on its city housing campaign, Bring Chicago Home. April says she found her passion.

“I’ve done phone-banking. I went to Springfield. I talked to my alderman and my state representative and they’re both on board for Bring Chicago Home.

“It’s a lot of volunteering, but it’s worth it. I feel like I’m giving back and I’m taking some of my power back. It makes me stronger. It makes me feel like I made it.”