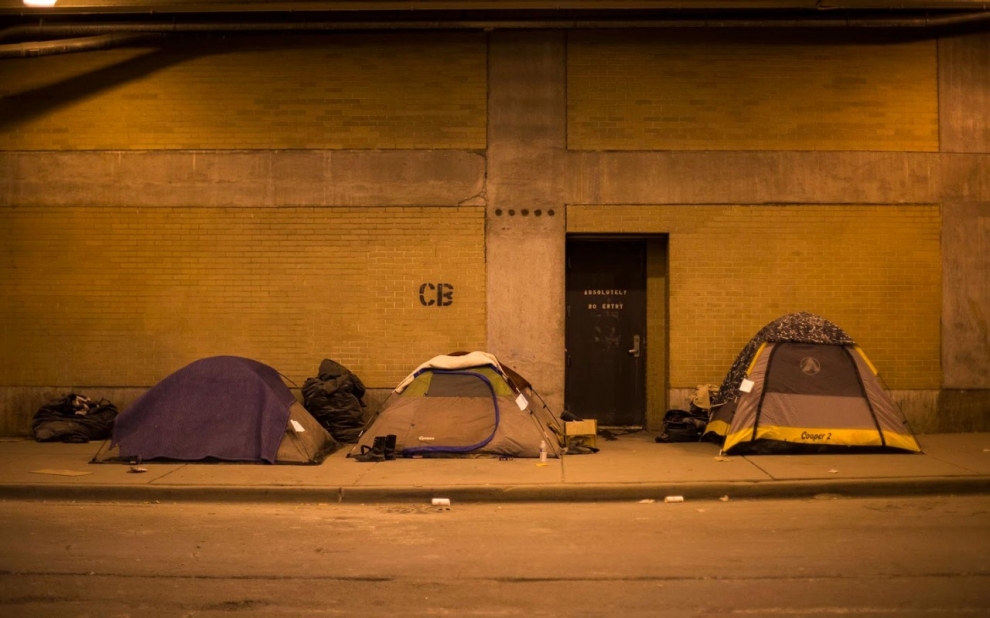 After a lawsuit by homeless people who lost possessions to street cleaning, city now gives notice of sweeps

For those living on the street, keeping track of one’s most precious mementos and clothes for survival can be a daily challenge. For some of Chicago’s homeless, that task was supposed to have been made a little easier this year, with a new policy designed to provide greater warning when an area would be cleaned — a process that often results in the loss of keepsakes, advocates say.

But months into the new program, those who pushed for the changes say the results are limited.

In February, the city of Chicago settled a 2013 lawsuit brought against it by the Chicago Coalition for the Homeless, which had challenged the city’s policy of removing and discarding the property of homeless people when conducting street sweeps.

The policy as laid out in the settlement states that the city must give people living on the street a chance to move their belongings.

Orange stickers must be affixed to the sides of tents and near makeshift cardboard shelters a week in advance and display the date and time of the next sweep.

The city also removed police from the street cleaning process. The homeless say officers would harass and arrest them without cause.

“It was illegal for them to do what they were doing,” Renard Parish, 47, one of the homeless people who joined the suit, told Al Jazeera. “They didn’t come down and give us any warning.”

Well-intentioned as the changes may be, they don’t give members of Chicago’s homeless community complete peace of mind over their belongings.

“It’s not a guarantee,” said Carol Boyd, president and founder of Humble Hearts, a charity that helps the homeless. Boyd goes out twice a week to distribute food to the homeless.

Since the policy was implemented in February, Boyd said she still hears of incidents of police harassment and the sanitation department’s removal of homeless property, especially what’s been unattended. She said it forces the homeless to move from place to place.

“They will take homeless people’s belongings even if the homeless people are there,” Boyd said. “I’ve had a few that have had their things taken away. Yes there’s a policy but some of the City of Chicago workers are plain assholes, and they throw it out anyway.”

Chicago’s Department of Family Support Services, referred to Al Jazeera by Mayor Rahm Emanuel’s press office as the relevant agency, did not return request for comment.

The new policy only applies to two areas in the city — Wacker Drive and under the Wilson Ave. bridge — both places where homeless individuals congregate. For now, that’s as far as the program goes.

Boyd said an additional problem with the system is that people new to homelessness don’t necessarily understand the new rules and can find themselves caught off guard without a chance to defend their property. A sweep can take place in the time it takes to stand in line for free food or use a restroom, she explained.

The city needs to do a better job of educating the homeless and providing them enough time to ensure their belongings are secure, advocates say.

Patricia Nix-Hodes, Chicago Coalition for the Homeless’ law project director, who fought for the February policy change, hesitated before calling it a success.

“We certainly think the policy is a step in right direction, with more notice. It’s a shift, and we have more work to do to monitor to be able to comment more broadly,” said Nix-Hodes.

Problems with implementation aside, the homeless and their advocates say that respecting the property of people who have nowhere to live makes it easier for them to find work, as they are able to leave their property without fear of it winding up with the trash.

This is a particular problem for people forced to abandon possession while seeking day labor in the mornings or looking to get into a shelter to survive the cold of a winter night. During this last winter, at least 26 people died of hypothermia, many of them homeless. Removing the clothes and blankets of the homeless — sometimes the only protection they have against the cold — puts their lives in danger, advocates say.

Parish was living on Lower Wacker Drive during the bitter winter of 2013. Police arrested him for “trespassing,” even though he told Al Jazeera he was on public property. After placing him in handcuffs, the sanitation department threw his belongings into a garbage truck.

Parish said he lost his wallet, his social security card, obituaries of lost friends, his mother’s bible and his father’s razor, which he’d had kept on him for 40 years and through other episodes of sleeping on the street. He said he had been hoping to give the keepsake to his son, who lives in Chicago’s south suburbs with his mother. The city also trashed photographs of his children and step-siblings.

Those heirlooms kept Parish connected to family and friends he had lost. It was an emotional blow, he said: “There are things that can never be replaced.”