We are close to having our CHA Reentry Pilot approved and implemented by CHA and we need YOUR support!

Chicago Housing Authority (CHA) will soon give final approval to pilot a housing access program proposed by the Reentry Project at the Chicago Coalition for the Homeless. 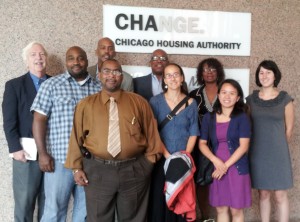 We’re asking you to send a message to the CHA, which is now accepting comments from the public on its proposed new programs, including our pilot housing initiative.

The pilot we’ve proposed would allow select reentry service providers to recommend top clients to the CHA, allowing these clients to rejoin family who live in public or subsidized housing. Up to 50 ex-offenders recommended by several respected providers, including St. Leonard’s Ministries, would be qualified to access housing during the three-year pilot.CCH’s Reentry Project is made up of ex-offenders, advocates and academics. They ran a survey that showed 48% of people in Chicago’s shelter system have an old conviction that bars them from living in CHA housing for five years, under local rules adopted by the CHA. 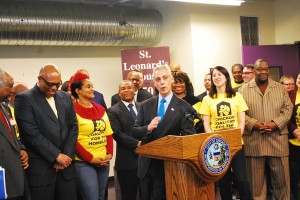 These mothers, fathers, minimum-wage workers, and students have been active in rebuilding their lives through job and educational programs. Now, they need a fair opportunity to access stable housing.

The Housing Authority of Cook County agrees with this, and is about to implement our reentry housing pilot with providers in suburban Cook County. And among 125 political leaders and organizations that have signed on in support, Mayor Rahm Emanuel strongly endorsed the CHA pilot at a press conference in March.

More information on the Pilot can be found here.

Please take a moment to send a message expressing your support to the CHA, which is accepting public comments until next Monday, July 28th at 5 P.M.