January 28 – Thanks to our dedicated supporters and the Yelp Foundation, Chicago Coalition for the Homeless won the most local votes – and a $5,000 grant – in the  social media contest Yelp Foundation Gives Local. 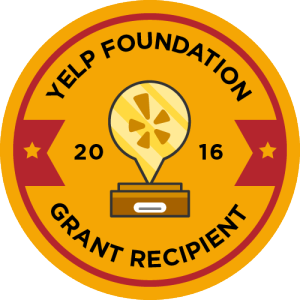 Yelp Foundation announced today that it will award $750,000 in grants to 225 non-profits working in 75 communities across the U.S. Yelp selected three finalists in each city, then asked the community to vote daily for two weeks in December on their preferred charities.

“CCH’s supportive online community makes the difference. We’re grateful for supporters who help us get the word out on our issues and events, more than 7,300 people on Facebook and 3,800 on Twitter,” said Anne Bowhay, Director of Foundation Relations and Media.

Yelp Board Chair Erica Galos Alioto blogged the news today: “We saw a ton of talk on the #YFGivesLocal hashtag, with locals sharing who they voted for and nonprofits spreading the good news about their nomination. Each one in their own way supports the Yelp Foundation’s mission of addressing the needs of local communities including: access to information, education, local economic development, and freedom of expression. It’s pretty cool to think of that mission making progress in so many cities across the nation, and I can’t wait to see what each of these nonprofits is able to do with their grant winnings.”

A full list of Yelp’s national winners is available here.

Many thanks to the Yelp Foundation!